I normally travel with carry-on baggage only, but it’s not because by the end of a plane ride there’s nothing that gives me greater relief from coach seat-cramp syndrome and DVT than sitting down in another small seat in a moving vehicle. Nor is it that the prospect of walking around an unfamiliar building filled with carousels from deSade’s worst dreams fills me with nauseating dread.

The reason is that if I’m traveling by air, I’m interested in getting where I’m going. Car trips are for taking in the scenery – plane trips are for getting somewhere as fast as possible. Airports, with a few exceptions, are incredibly dull places. Let me put it this way: When was the last time you fond a jacuzzi full of literary intelligentsia well-plied with alcohol in an airport? If you’re anything like me, it’s been a while, and when I’m traveling from home to a convention (two locations highly likely to involve the aforementioned flavor of decadence), there’s precious little an airport can offer that I find the slightest bit interesting (aside from, you know, the plane).

This time, however, I was going to a my first general interest science fiction con entirely as a pro (rather than as a part-time fan), so I thought it important to dress up. I brought a nice sport coat, a pullover or two, some mandarin-collar semi-formals, and threw a mess of more knock-around clothes in for good measure. This put me well over my bag limit, so I had to concede to the eventuality of baggage claim.

I should have brought scuba gear instead.

You see, the eastern seaboard of the U.S. is one long swamp stretching from southern New Jersey right down to the tip of Florida, and swamps are peculiar places. Where most land environments have an atmosphere of air with a little bit of water dissolved in it, the atmosphere in a swamps is basically an above-ground lake with a higher-than-average dissolved oxygen content. The reason H.P. Lovecraft set his stories on the East Coast is because it’s the only place in the U.S. outside of Bayou country where Cthulu could breathe above the ocean surface.

As such, the humidity content on Friday afternoon was such that I could have done far better with gills than I did with lungs, and walking out of the sliding doors at Dulles into the afternoon heat I felt rather like a cheerio left in the bowl overnight on the counter top as the milk curdled around me. 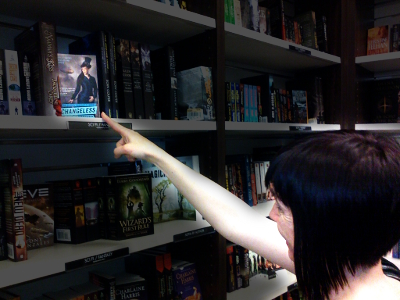 Fortunately, I had swimming alongside me the equally bedraggled Gail Carriger (whose book we found in the Dulles bookshop as well – no wonder she hit the bestseller list!). Despite Gail’s public reputation as a genteel woman of breeding, she gives me a run for my money in the obscenity department when dealing with suspiciously titled “customer service” reps at rental car agencies. At such times she is a veritable font of snark, which more than made up for the sanitized films on the flight. Between that and the silly sing-alongs on the Beltway, one couldn’t ask for a better traveling companion.

An hour and a bit later we rolled happily into the hotel parking lot, both changed clothes in situ in the cab of the teeny rental car, and strolled triumphantly through the gathering dusk to register as both hotel guests and program participants, meeting Kim The Comic Book Goddess on the way in. This was the first of many instances that night where I was identified primarily by my hat — bur more on that later.

Next Time: The Saga Of The Hat