This story is now available 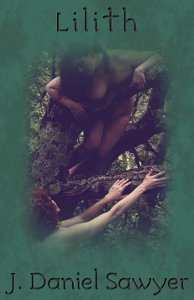 at Amazon, Barnes & Noble, and Smashwords.

One of my favorite stories in all of mythology is the Talmudic story of Lilith. The insight it gives into the development of Judaism, of Hebrew mythology and culture, and its naked and impossible-to-talk-around display of preclassical sexual politics have all tickled the cockles of my geeky heart for two decades now.

What would happen, though, if Lilith were able to tell her own story in her own words? Perhaps something like this:

You say I am the night hag, the bewitching moonlight, the child-eater who causes crib death. You say I am the woman your husbands see at the temple when they are seeking something more than you can give. It is true that I seduce, and I destroy, and am unjustly maligned for both. Your jealousy pushes me into the darkness, makes for me the role which you imagine I play. It keeps me at the edge of your firelight and behind the ghouls in the stories you tell your young men. You are the daughters of man, but I am the daughter of the earth.

And that was why he hated me.

I awoke in the ground, the mud crumbling off me in the drying Mesopotamian sun. I knew nothing at first but the sun on my skin and the breath in my lungs, a lavender fire. I heard his breath, but I did not yet know what breath was.

The date palms above filtered the light into dozens of fractured, dancing spears, warm on my thighs, my face, my vulva, my toes. I awoke on the ground, and came out of the earth, and heard the Voice whose breath awakened me, whispering secrets in my head. I alone was given the power of creation, the dominion of immortality. I was the Voice’s delight in the world wrapped up in clay, and the man on the ground beside me was the order of life, and from the intercourse of chaos and order would come the future of the universe. We were the progenitors.

And so, we awoke.

I looked down upon him, and touched him. I had never touched anything before. His skin felt like water that never ripples.

I ran my fingers over his brows, behind his ears, down his body. I watched him grow in my hands as I pulled back his foreskin, I felt him twitch and gasp as I probed him, and I heard his voice for the first time when I touched his knees and he cried out and sat upright. Bewilderment and sunlight danced in his eyes.

We had, as yet, no language but touch and gesture, and yet for that one moment, we understood each other. In later years, when he was old and dying, he would tell his sons how he took my hand and led me to the water where we bathed and explored, and where he took me before he discarded me on the way to something better.

An old man needs his ego as comfort, perhaps, before he dies and is no more. But he did not take my hand, nor did he ravish me on the riverbank. I took his hand, and then I washed his body, and then I mounted him and pulled the life from him, and we melted into one another for the first time. I fell asleep on top of him, his cock still warm inside me, our connection unbroken.

It did not happen again. He was order, and I was chaos.

We woke up and he felt himself pinned by my weight, and he panicked. He pushed me off, stood up limply, and stumbled into the stream to speak to the Voice of the forest. As he spoke, we learned language. Both hearing the Voice, our minds were bent into grammar, and we knew sin. The fear of an animal who awoke under a weight became the hatred of a man, full of scorn and fear, who needed order to dominate all.

The Voice told him that the way of things was for creation to come out of chaos and order. As the Voice’s word dipped into the formless chaos and begot the world, so the man would dip into the woman and together beget the future. The Chaos and Order were co-creators, each one intertwined, flowing into and shaping the other.

But orderly minds are rarely sensible.

When I looked at the birds pecking the dates I saw the flow of life and death in violence and birth, the tension of forces always threatening to break loose. The wings of the bird pushed against the air, a constant dance of dominance. He looked at them and he saw taxonomy and patterns. The repetition of the feathers and the geometry, the elegance of form-fit function, the imperfections that served to reinforce the structure.

But when he looked at me he saw not the lover who had awoken him, the harmony with whom his voice would make a symphony, the saxophone solo on the bed of his bass line; he saw the destruction of all that he was. He saw surrender to forces he could not control. The death of the orderly world that he already loved.

He looked at me with murder in his eyes, and he saw his death.

Until then, there had been no word for death.

Read the rest on your Kindle, Nook, and other readers.