I am pleased to announce the ebook availability of my 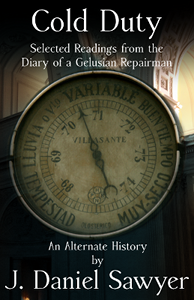 acclaimed Steampunk story Cold Duty: Selected Readings from the Diary of a Gelusian Repairman, which Steampunk Scholar Mike Perschon reviewed a couple years ago, and has since described as “Probably the best steampunk short story I’ve read.”

In 1860s Manchester, young Jamie Broadman wasn’t much to look at, and he was even less to talk to. His wealthy industrialist father wasn’t impressed with him, his brother was a prodigy engineer, so they both allowed him to drift into a life in the stables. It was a life he wanted–working with horses, keeping company with servants, living in the country far from the concerns of education, business, culture, and politics.

But when he mends the track’s generator without spare parts or instructions, his brother recognizes an innate mechanical genius and inducts him into the family business, forever changing the face of the Broadman Royal Materials Corporation, the Empire, and—when he discovers the ghastly royal secret behind a Mason’s door in the factory—the shape of world history.

With the kind cooperation of the British Museum and the Broadman Estate, these are the edited diaries of the man who single-handedly created the modern world…by accident.

And now, a sample to whet your appetite:

Cold Duty
Selected Readings from the Diary of a Gelusian Repairman
by J. Daniel Sawyer

What follows are edited transcripts from the audio diary and excerpts from the written journal of James Broadman, technician and stockholder, Broadman Royal Materials Corporation. These transcripts were created from the original handwritten journals and the recordings on prototype Seanaic wax cylinders with a grant from the Broadman Estate and was committed to the British Museum historical collection, July 1, 1940.

It ain’t every day a man gets his first real job. I probably wouldn’t ha’ gotten it had me father had his way. He pegged me as shorter on brains than me brother when I was a young’n, and sure’n if he weren’t proper in that. I don’ mind. I liked me work in the stables, keepin’ the horses clean and fed and healthy when I was a lad. The rest of the track ran around me, with a Watts engine runnin’ the Davy arcs and the well pump and the starter gates and old Jimmy keeping the Watts in good nick. I kept the animals happy. First just the family’s, then all the boarded ones. I wasn’t supposed to have nothin’ else to do. But time came when the old Jimmy couldn’t keep on his feet anymore for the drink, and I didna wanna see the old goat get shipped, so I gave him a fresh bottle of whisky and stole his tool belt from him.

Turned out to be no great thing to replace the gaskets, or clean the valves, or service the giant puffer. Nobody told me how, it was just came kinda natural to me, fixin’ things—no different than finding a little rock in an animal’s hoof.

I’ve always reckoned I’d run the stable for the rest of me life, and you know, that woulda suited me just fine. Me days filled with the horses and the smithee and the sounds of the engine, me nights taken down at the pub with Simon or trying to coax Charlotte out onto the green.
But it was me brother Sean that finally caught me at it, last night. The turbine on the Watts engine had gone, and the two Davy’s arcs were dim. They were supposed to stay lit, and with everyone else gone home, it was down to me to get it up again, and without settin’ the shop on fire with the candles or the gaslights.

When I got the pressure vented and the turbine cowlin’ open I found a few copper brushes set to stroke against some brightly colored disks that the turbine spun. I’d seen inside before, when I were nine and Jimmy replaced one of the disks. I remembered then that the brushes were actually supposed to drag along the discs, but tonight several of ’em brushes weren’t makin’ contact anymore, and two of ’em were worn all down to the nub. Old Jimmy wasn’t anywhere about, and I’d never needed to do up any of the generator parts from scratch before.

Lookin’ around, I found a couple of the brushes at the left end of the turbine were new and had a lot of slack on ’em. I could tell Jimmy in the morning that he needed to make new ones—for now, I’d just snip the slack and use it to replace the ones that had gone off, which was all well and good until I heard Sean’s voice behind me when I was closin’ the cowlin’.

“How long have you been doin’ that, now?”

I jumped. Me brother never came down to the track except for the races. Turning round to face him, I saw his arms crossed and his eyebrows raised. “Who taught you to fix the Watts?”

I told him nobody taught me, it just had to be done.

“Good with machines then, are ya?” Sean had his full dress on, military from toes to crown. I felt shabby standin’ in front of the family genius, but then I always had done. I took my ‘cerchief out of my pocket and mopped the oil off my hands.

“Clean it up. Guv wants you down at the house.”

He spun around on his heels and strode out of the stable. When his back was turned I didn’t feel like a kid so much anymore.

I thought cleanin’ up would be enough, but when I walked into the Guv’s study I felt like a grease monkey all over again. Sean was there, sitting with a brandy in his hand in one of the Guv’s matched wingbacks. Opposite him the Guv had his pipe going, and right after I come in he moved his horse and said “Check.”

“Jamie, good.” He didn’t really even turn to look at me. I didn’t really expect him to. “We’re taking Brass Farthing down to run her in the Royal Ascot. Have her ready to board the eight fifteen tomorrow.”

“Yes sir. I’ll have ‘er up for ya.” I made to go, but after Sean made his move they both stood an’ Lord above if the old Guv didn’t walk straight up to me and clap me on the shoulder.

“Jamie, your brother here tells me you’ve got a way with machines.”

Now I don’t know how this’ll change now that this all gone down, but Sean and I never were the best of friends. He’s six years older than me and smarter than an owl—got himself learnin’ at university and all—and he always made sure I knew I was dim as candle drippings. But he looked pleased, in that kinda friendly way, and not mean at all, so I decided not to lie to the Guv.

“Yes sir, I s’pose I do. They just makes sense to me, and I ain’t never met one I couldn’t get along with. They got spirit, like a good horse, but they ain’t as hard to talk to.”

The Guv nodded his head in some earnest, like he just found the final piece to a puzzle. “Well then, you’d better pack your bag then too. We could use a man like you at the plant in London. Someone in the family, someone we can trust. Yes, pack it well, my boy. If you work out, you’ll be vital to our operation.” He gave me a final nod, then looked back to Sean and said. “Well, that’s done. Who’s move is it?”

The two of ’em went back to their game like I wasn’t even there. I s’pose I shoulda been put out, but I was set and fit to bust. I took the carriage back out to the track and brushed Brass Farthing down, packed in her tack, and then sidled up to my quick room above the stables. I got me bed and room all proper down at the estate, but I stay here most nights. I got me kit all packed now, everythin’ I might need for weeks. I wanted to go tell Simon and Charlotte the news, but I ain’t gonna get the chance before we’re off in the morning, so I’ll have to post them from the train.

It ain’t every day a man gets offered a job on merits. Not every day at all. But Jesus come home, it sure is a fine thing.