Time for a new short story–this one is called 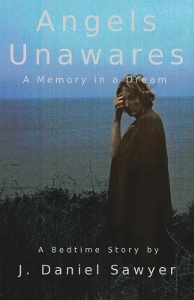 Angels Unawares. It first appeared as part of the Sculpting God series, which is currently re-podcasting from this blog. It later appeared as part of The Podthology, last year’s anthology of the best of podcast short fiction (along with Cold Duty, available at right, and The Man In The Rain, which which will release in a few days).

Now, to brighten your e-book reader, I give you one of my favorite bed-time stories, complete with a new afterword that tells the story behind the story.

In 1898, a woman’s body was discovered broken and battered at the bottom of a tall sea bluff in Southern Scotland. and the small town she lived in began locking the doors at night. Only one man saw what happened, but he carried the secret of her death to his death bed. Wounded in the trenches on the Western Front, he gives his last confession…

Get it now, DRM free, from Amazon or Smashwords.

This is how it happened. I swear. What you are about to hear is the absolute, unvarnished truth–I don’a give bugger all about whatch’a found in the histories. It wasn’a a suicide, and it wasn’a murder. I was there, and I saw, and no one else did. Their “forensics” don’a mean a bloody thing, because I know. And what I saw is more amazing than what they think happened. But I kept it to myself, just to be sure that no one would ruin it–because I promised her, you see. And I had to keep the promise – no one could have broken it after seeing the look in her eyes.

But first, I suppose you’ll want to know about how it started – what it was like in this town back then. The commotion started back when her body was found beaten against the rocks like so much driftwood. That wasn’a the unusual part – a lot of people fell from that trail on the bluff. That’s why the laird put the fences up when I was a lad. It never stopped anyone from going down there, you understand, just made him feel better when there was a fuss. Great spot for the spring frolic, it was, and of course we were all up there as normal. When they find bodies down in the surf there it’s usually a suicide or an accident – someone gone off their melon on too much whisky. But they’re always normal people. She was unusual, and the lengths they went to trying to explain it made the whole town start locking their doors at night.

They said that she was mutilated–or deformed – that her body wasn’a like a woman’s body, but they weren’a sure if the fall did it or if it was something else. They said that the policemen fought with each other to avoid having to be near her. It was hideous and beaten, and they’d never seen anything so brutally done. In the end it was only her cloak that identified her.

It was always her cloak that announced her.

Dark, it was, and seemed to fall about her like water. She always wore it up there at the frolics. Even when one of the youths would bring a guitar or a penny whistle and she danced for us with those dances that would pull us away from the material world for a moment or three – even then the cloak was her companion. She liked it because it kept her safe in the shadows, blended right in when it was dark, no matter where she was. Glorious, shimmering dull blue, deep but faded, fastened round her neck with a dull golden braid – thinking of it now I realize that she and the cloak seemed to be two expressions of a third, hidden thing. Like she was a tired faerie from an older, forgotten world. But that’s maybe the mists of fond memory speaking.

So they became convinced, eventually, that she had killed herself, though they couldn’a imagine why, and eventually the memory of her faded into the ghost story the young ones all hear from the older ones upon their first visit to the frolics. Everyone was sure that it was suicide, or that she’d been killed by a lover – an older, married man they fancied she’d been seeing. And partly the reason was that no one they questioned had seen her that night after the moon rose.

But I saw her. And I know what happened.

We always called her Aadi. One of the other young men who came to the frolics heard it from his father serving in India – he said it meant “beginning.” She was the first one to clear the grove on the bluff, and as far as anyone could remember she had begun the spring frolics. I suppose the old druids would have called her the May Queen or thought she was a dryad, but we had no use for superstition. The dawning future had enough magic of its own. The twentieth century was coming, nature was being conquered, and, in our little lowland village far away from the noise and dirt of the factories at least, there was nowhere to look but forward and up. Of course, all of us knew her real name – though none of us knew her age – but Aadi suited her better than the name she called herself, and that is always how I’ll remember her. The sound of it was always soothing, and she seemed to me as ageless as the hills she lived in. My father told me, before he passed on, that someone had always been up there – when he was a lad he too had gone to the bluff and met the woman in the trees who lived up in the hills, but that one had been a minstrel. Aadi was no minstrel – when pressed she might have been able to squawk.

It was early may–late enough that the rain had stopped the pretense of snow and had contented itself merely with being wet. Ten or fifteen of us went up to the grove on the bluff as often as we could to catch the scent of the changing seasons, to dance and play, to wrestle with the lassies among the tall grasses, and to watch the moon set on the sea. Someone had brought a book of poetry that night, and we handed it around with the Glenlivt, reading to each other while the wind came up. On that cold night the drink was like hot butter, coating inside with warmth, smooth as a woman’s neck. When mixed with the pine fire and the smell of drizzle, the glow of faces in the firelight, the sound of Shelly being read in the halting voice of a seventeen year old Scots lad, it seemed to thin the veil between the worlds. It was a night that felt more real than any other, perhaps because it was as unreal as any I have yet lived. An evening when, for a moment, time stepped outside of itself and flirted with eternity.

Read it on your Kindle, Nook, or other reader.