Released: The Man In The Rain | 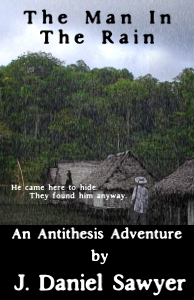 is nearly over. And to whet your appetite for more, I’m pleased to present you with the ebook of the first Antithesis adventure, The Man In The Rain.

Mondu, once an AI designer at the top of the Nigerian IT industry, needed to escape from a life that was eating him alive. He found refuge as a shopkeeper in the depths of the Amazon, at a unique resort. It’s a preserve for all forms of Amazon life–reptiles, mammals, and human and material culture. No modern technology allowed.

In a world of dictators and perpetual surveillance, it is one place where a man can disappear–and Mondu isn’t the only one who knows it. When the tourist traffic is driven out by torrential rains, only the businessmen and the scientists remain–until the day when a man walks into Mondu’s shop. He wants to disappear–and the Yakuza are hot on his tail.

Those of you familiar with The Antithesis Progression will recognize the characters and the universe, but this story stands alone. Consider it an appetizer for the main event coming later this month. But until then, I invite you to join me for an excursion into the heart of the Amazon for a tale as close and dangerous as the jungle itself…

The Man In The Rain
An Antithesis Adventure
by J. Daniel Sawyer

Mondu’s face broke into a broad smile. The man was looking for one of the boss’s special services—a passport, probably, but it could be national ID, or a false account, or any number of other things. It was a chance to do something fun. “We have many tools available.”

The customer nodded. They understood each other. “My needs are specific—as you can see from my suit, cleanliness is important to me.”
“Will you need privileges?”
“No. Just cleanliness.”
“Understand. Take this,” Mondu handed over a pencil and a paper form. Based on the boxes he checked, the man didn’t just want a passport, he wanted an identity. He checked the whole sheaf—biometrics included.
“This should do me fine.”
“Price is…”
“Not a problem.” He produced a deck of cards from his pocket and set it on the table. With his left hand he cut them, then dealt the first card to Mondu, face up. “Put this through your assay—it should settle the bill.”
A playing card? Mondu slid the card off the tabletop and threaded it into the assay scanner he’d used the day before to determine the molecular structure of the ring.
“Set it to x-band.”
Mondu complied. Under the low level X-ray bombardment, the card showed platinum in the ink. A lot of platinum. The boss set the store’s exchange rate at twelve hundred credits per ounce. Mondu looked back up at his customer. “You have how much?”
“Two decks.” Mondu nodded and did some quick mental calculations. It would more than cover the fee.
“Two decks for a full ID jacket.”
“How long?”
“Three hours.”
“Done.”
“Stand in front of the register, please.” Mondu flipped open the camera port concealed in the cash register. “Eyes straight forward.” The customer complied, and Mondu snapped the photo.
The customer donned his hat and tipped the brim to Mondu. “I’ll see you this evening.” Without another word, he turned and walked out.

Read the rest! Purchase this story for Kindle at Amazon, and for all other readers and in all other formats at Smashwords.