Have you ever seen that well-dressed 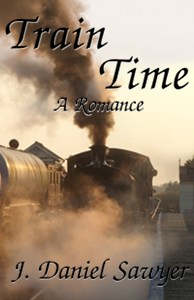 man at the airport, or the station, who stands patiently by as if he has all the time in the world? Have you wondered who he was waiting for, and how long he’d stay? Have you ever been that man, stuck in the hours between delay and disappointment, with no way to know if the person you’re waiting for will show? Let fancy take you to the mountains of Northern Italy at the dawn of the 22nd century for the story of a woman and a train–and of a walking stick and the man who owns it, as he waits for Train Time.

You can find the story at Amazon, Barnes & Noble, and Smashwords. Below, you can find a sample.

—Story Sample Below The Cut—

The cane foot tapped measuredly on the plank, hammering out a steady tick-tock rhythm. It was not a rubber foot, such as had been common on cane-feet for a century now, but a proper pinned steel cane foot, suitable for a weapon or a prop to lean on or a scepter with which to gesticulate. It kept its clock-like rhythm even as a steam engine pulled out of the station, a few feet from the bench where its owner sat in his frock coat and top hat, measuring the minutes in percussive time.

The late afternoon summer was dry and hot, save for the oppressive blasts of humidity that coated the ticket window with fog for a few brief moments when a locomotive deigned to grace the lonely platform with its presence. The endless in-between times stretched on like the deep-split grain of the wooden planks that seemed to continue uninterrupted from one floorboard to the next. Across the double-tracks, past the far platform, flies and weevils swarmed above the autumn grain, taking from it what pickings they could before the harvest.

It was the last day of summer. Soon the dust would rise from the fields and the northern world would hunker down for a winter season that was comfortable and warm, circumscribed by brick and fiberglass, hearths long since replaced by electric heaters. The days when people froze to death for want of wood, or heating oil, or gas were well gone, but the anachronistic frock coat and cane went seemingly unnoticed on the forgotten railway line, where steam power serviced the nostalgic aging population whose automated homes drew nuclear power from the worldwide grid. The coming months would be a time of hibernation for Europe, but neither the cold slow yearly death the old world had endured, nor the slowed down fallow time of the new world were in the future of this man from out the storybooks of Conan Doyle or the misty streets of Whitechapel. And yet for all his out-of-place formality, the bench he sat on was wrought iron, and the foot of his cane kept perfect time. He seemed a fixture in the weatherbeaten station.

The steel band left small indentations in the old, grey oak, and the cane’s wielder was beginning to regret his promise to await the train from Bonn. It had seemed like a good idea at the time, it had seemed the most natural thing in the world. Leaving Gibraltar, they each had business to attend to, loose ends of past lives to tie up before they embarked together for the new frontier. She could have flown in, of course, the airport was near enough from their ship’s moorings. Or she could have driven, but somehow, even back in Morocco, the steam train had seemed best. It had seemed fitting that they leave their old world behind in its proper style, and the Orient Express and a few of the other remaining locomotives on the planet ran right past their destination.

So, it had been settled. They had kissed goodbye with promises to meed in two months. There had been chats, and vid calls, and letters, and every other sort of communication that was available to them, and when they got busy and went without each other for a few days or a week, their reconnection was that much sweeter for the absence. She was a hunger for him, as real as his need for meat and far more dearly sought, while he was to her like water. That’s what she had said, over and over again.

That was what she had said, and he had believed her. But he had been here, waiting on the Orient Express, its last run of the summer, for two days. It had been delayed, there had been no word. Perhaps a mechanical breakdown had stranded it in a high pass – but he discarded the notion as soon as it occurred to him. This wasn’t the nineteenth century – there were were sat phones and radios, and if nothing else the ticket agent should know something.

But if he knew anything, he wasn’t telling.

She was a practical woman, not one to wait around for repairs. If the train were stranded she’d probably found a flat to let while she waited, even though the train had comfortable accommodations, she’d want to take advantage of a last chance to explore an alpine village. She’d dig in and sample the culture, find a club with a good local band and drink microbrews. She’d tour the local historical monuments and maybe have a long conversation over chess in whatever language was spoken in that remote corner of the world.

She spoke all the languages, she’d have no trouble blending in. But when her train departed she’d be on her way to him again, forsaking whatever brief affair she found to occupy her time, to be her last hurrah.

Assuming she had gotten on the train at all. Assuming she would tear herself away from her new life by the stranded train.