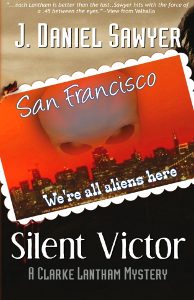 and those who prefer neither title, I am very proud to announce the continuation of The Clarke Lantham Mysteries.

This is the biggest one yet, ringing in at nearly the same length as Predestination, and the adventure scales with the book. Teaming up with his assistant Rachael and his new squatter Nya Thales, Lantham gets to match wits with alien hunters, Chinese assassins, and FBI agents in his attempt to solve an apparent alien abduction before the only witness is…but I’m getting ahead of myself. Here’s the back-of-book copy, to give you a better feel for what’s going on.

The California Academy of Sciences, a bastion of integrity in scientific public relations, has agreed to play host to one of the most valuable travelling exhibits in the world: a Mars rock with microbial alien life. But the attention it’s drawing isn’t just international, it’s interstellar. When a commando team of gray aliens steals the rock and abducts a security guard, in full view of the cameras, the head of the security contractor has only one place to turn: Clarke Lantham Investigations.

Clarke Lantham already turned down an alien-related job earlier in the week, and has had his fill of kooks, cranks, and crooks of all kinds. Unfortunately, with an old client suing him, a employee to pay for, and a new ward chewing through his finances, he needs the paycheck. This time, though, he’s not the only one looking for a missing person: the FBI, Lloyd’s of London, and the Chinese Ministry of State Security are all breathing down his neck.

From the dark underbelly of the Tongs slave trade to the shark-infested waters of Bolinas Bay to the skies far above the concerns of mere mortals, Lantham races against spies, assassins, and conspiracy theorists to find the missing man–and the treasure that went with him–before the theft becomes a diplomatic incident between the world’s most fearsome superpowers and the alien overlords they allegedly support.

When the field gets that crowded, someone’s bound to get hurt. But even that might be okay for Lantham…if he didn’t have to sleep on the couch.

Then, grab the book and dive in. It’s available right now through Read the rest on your Amazon, Barnes and Noble, and Smashwords.

I hope you have at least half as much fun reading it as I did writing it. Enjoy!