Released: The Serpent and the Satchel

I used to own a menagerie 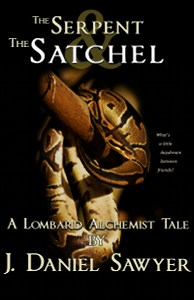 of boids. Burmese or Ball or Reticulated pythons, or Boa Constrictors, they’re not exactly warm and fuzzy, but they are fascinating creatures. In a very real sense, living dinosaurs.

Of course, they’re not exactly cheap, so I had to justify their existence by using them in movies, photo shoots, and other projects. Though the menagerie is now mostly gone, I’m still using them. I used one of the photo shoots featuring Brian the Burmese Python as the basis of my story Lilith. Now, I give you a fun adventure story starring Judith the Burmese and Monty the Ball Python, a summer afternoon, and a great deal of mischief wrought by a certain pawnbroker.

I proudly present to you the latest Lombard Alchemist tale: The Serpent and the Satchel

What’s a little daydream between friends?

A cubicle is no place to waste a golden summer afternoon, which is why Albert escaped early to spend some time at the park. But when his boss piles on extra deadlines, he’s forced to work through his time off–at least, that’s the plan.

But neither Albert nor his boss could have planned planned on a surprise adventure courtesy a broken briefcase, an escaped python, and a mischievous pawnbroker who keeps a creepy little shop out on the edge of nowhere.

Available now on Kindle and at Smashwords. Coming soon to Nook.