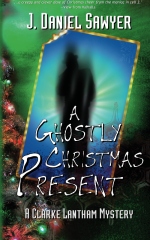 Volumes 2 and 3 of The Clarke Lantham Mysteries are available in paperback! The story which began with the cutting-edge biotech noir of And Then She Was Gone continues in Book 2 with hauntings, lawsuits, car crashes, and holiday relatives in the dark and friendly little cozy A Ghostly Christmas Present, featuring new cover art and line drawings by Kitty NicIaian.

When it comes to raw-deal Christmas presents, you can’t beat being thrown in an out-of-state jail on a trumped up charge—but detective Clarke Lantham can’t resist a morbid challenge. So when he calls up his brother for help with bail, he steels himself for the ordeal of spending a holiday weekend with relatives who put the “strange” back in “estranged.”
That was his first mistake. But with only two days to clear his name before he gets thrown back in the slammer—and an old client gumming up the works, a ten-year-old niece with a ghost problem, and the occasional murder competing for his attention—it probably won’t be his last.
Book 2 of The Clarke Lantham Mysteries

Now, you can read the book View from Valhalla calls “A creepy and clever dose of Christmas cheer from the maniac in cell three” from the comfort of your armchair without the bother of a screen.

Get a taste of A Ghostly Christmas Present here, or buy it in Paperback, or as an ebook for Kindle, Nook, Kobo, iPad, or any other e-reader.

And then the adventure continues a week later on New Year’s Eve, with the romantic skin-of-your-teeth manhunt Smoke Rings. 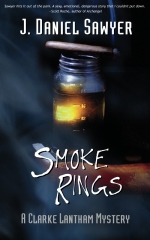 Every detective deserves a second chance…
Holidays make Clarke Lantham squirm–not even New Year’s Eve escapes his scorn. With his space cramped, his personal life on the skids, and his business under assault from lawyers and bill collectors, he holes up in his office, counting his blessings that the year from hell ends tonight.
So when an old girlfriend shows up with a chance for a $50,000 reward and a New Year’s Eve reconciliation, he jumps at the chance. After all, things can only get better, right?
Yeah, right.
Book 3 of The Clarke Lantham Mysteries

Ginnie Dare author Scott Roche says “Sawyer hits it out of the park…a sexy, emotional, dangerous story I couldn’t put down.” Find out for yourself what he means: whet your appetite for Smoke Rings here, or buy it in Paperback, or as an ebook for Kindle, Nook, Kobo, iPad, or any other e-reader.

There’s a lot more coming for Lantham in the next few weeks, so load up on books and keep your eyes on this blog.