As a writer, I have a problem. It’s the kind of problem I might need therapy for. I seem to have a terminal inability to keep short stories. They keep escaping.

But five years ago this week, I had a short story escape, and it’s turned into the granddaddy of them all. And Then She Was Gone, the first of The Clarke Lantham Mysteries. It started as a short story, which escaped into a novel. At the end of the novel I realized I had a series that would run perhaps four books. Now that initial arc is going to run eight novels, and I’ve got more arcs starting to develop as well. It also marked a huge turning point in my life as an author and as an entrepreneur.

Never before had I written in the mystery genre, much less written a book with a market in mind. I didn’t actually “write it to market” (in the sense that I took a look at what was popular at the moment and tried to hit that moving target), but I did write it for a particular market. Self-publishing was just starting to get viable, and I wanted to test the waters.
If only I could have known what was in store!

Up to that point, AWP–a production company I’d founded and worked with for ten years–had settled firmly into its second lifetime. 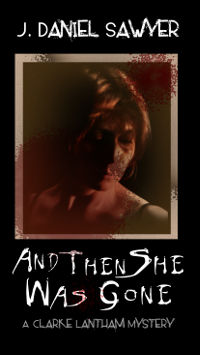 It started out doing radio dramas and indie films, then (after that proved wildly unprofitable) moved into media services, doing corporate videos, concerts, stage plays, and the like. With And Then She Was Gone, it became a publishing company.
Now, five years later, Lantham’s getting his sixth and seventh installment this year, and coincident with that the folks at AWP have decided to shake the series up a bit.

When the books first came out, the company decided on a faux-dangerous aesthetic, to evoke the feeling of the golden-age pulp stories, complete with scratchy fonts, to evoke a sense of dark, dangerous fun. The result was something like what you see here. 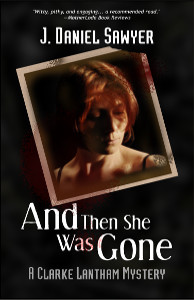 at AWP got a clearer understanding of the book business, and trained under design professionals in this very specific niche, the basic concept got refined into the look the series has carried for the last few years.

Now, five years in, with two new books coming out in the series, the powers that be have decreed that the series needs a new look. Something more modern, more in keeping with current tastes. Something that’ll bring out the dark edge in the books, more than the humor–my publisher reasons that while the dark twistiness in the books might put off people who come to them for the humor, the humor will register as a bonus to people who come for the dark, twisty puzzles.

So, with that, I’m proud to present you with the new covers for The Clarke Lantham Mysteries. I hope you like ’em!

So, if you like the old covers, grab ’em while you can. The paperbacks are going to be changing over the next couple weeks, and the ebooks are already in transition.