Things are back in full swing here. The day was packed, end-to-end, with lovely, lovely work.
First shift for me actually started out with trying to get the pup worn out. I got about three miles of walking in, which is less than I’ve gotten accustomed to but was just about what the post-injury knee could comfortably take. On the upside, the pup got about twelve miles of running in as a result of a very stubborn little orange ball that just would not stay with any of her humans, despite her fervent attempts to keep it from escaping into the surf.
Hey, what can I say? It kept her busy enough that I could actually hatch some evil plans with a potential client who joined me on the walk, and then go on to hatch further evil plans with another writer who was along for the stroll.
And the agate-hunting wasn’t bad either.
All in all, a good way to start off the day.

After I got home, there was a good solid AWP board meeting where She Who Must Not Be Named and I got all our in-house evil plans hashed out for the month. We finally figured out how to hang war boards in the office lofts, so the final part of our Evil Plan Management System is in place (huzzah!). Turns out that the evil plans really are ticking over–the amount left to do is shrinking at a glorious, if alarming, rate. I may soon have to cope with the problem of not being behind on anything.
A little intimidating, but I think I just might be up for it.

Once we had a plan, we hit the books.
Well, She Who Must Not Be Named hit the books. Suave Rob 3, to be precise. She set up on the couch with the manuscript and started her proof-and-continuity pass over the thing. Trixie noticed she was at work, so helpfully occupied the other half of the couch so that Kitty would have a place to put the pages she’d finished with. I caught a glimpse of it when I came downstairs to discover the collaboration-in-progress: 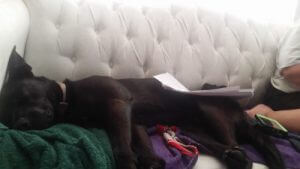 Me? I finished up some video production work and dove into some 3D graphics training for a while. Getting my skill-set updated to include character modeling and animation, in anticipation of a big project later this year.

Around 2AM I shifted gears, and set down to do my writing. I got about a thousand words down, hit a wall, threw them all out, got another thousand down, threw those out, and backed up to the beginning of the chapter and took another run at it. I might have to wind up abandoning this storyline for a while and coming back to it later. There’s a piece I haven’t been able to find yet.

On the other hand, I’ve left it in a place where I just might be able to run out the system. Just as I was wrapping up, I realized that my problem is that I’ve been resisting adding a new important character to the mix, because I’m afraid of losing track of all the moving pieces. So, tomorrow, I’m going to bite the bullet and take one more run at it, and see if I can beat it–if I can’t, I’m going to hop storylines for a while and then come back to this one.

This kind of stuff is a problem that I had with Book 2 of this series, and it comes from the complexity of the thing. It leads to a lot of second-guessing, false trails, and other stuff. And, since my characters have already blown up my outline, I’ve got that uncertainty going on without a map.

I’m having more fun, and this book is definitely even better than the last one (at least so far), and I’m working this in the way that I’ve learned how to work over the last ten books, but there’s still a huge lump of fear around “getting it right,” which is screwing me up. It’s all head games at this point. I’ll get through it, one way or another.

But, unlike with Book 2 when I’d get stuck like this, I’m actually excited about these roadblocks. I’ve learned to trust my process in a way that I didn’t used to, so I’m fairly certain that my subconscious will work this out.

Net progress: negligible. But I’m heading to bed in a fantastic mood, because I left things in a place where things could really take off tomorrow.