June is here! Summer has brought wonderfulness! An end to writer’s block! An end to the endless irritation that seems to saturate May every year!

First item of news, which I’ll have a proper announcement about tomorrow, is that I’m in a new book bundle. 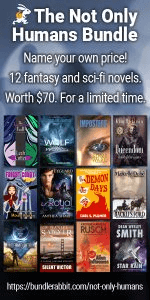 The theme of the bundle is “Not Only Humans.” It’s got some great stuff in it, from science fiction to mysteries to fantasies, all of which feature characters or plots that are strongly influenced by the presence of non-human actors (you know, like aliens, vampires, werewolves, faeries, etc.)
Check it out for yourself by clicking here

Now, on to the writing…

Totalling up the word count for May on Antithesis I get a grand total of….
5,200 words.
Dismal. Absolutely dismal, I tell you. So dismal that I almost decided to stay up another hour just to beat that monthly total in one evening. Might do that tomorrow, just to prove the point.

I mean, sure, yeah, I spent most of the month sick and dealing with the fall-out from being sick, but that only exacerbated a deeper problem that I was trying to avoid:

I was fighting major project block. I’d written myself into a corner. Every time I tried to write myself out, it felt forced and read false. I cared too much about the storyline that I was having trouble relaxing and just writing it.

Which storyline, you ask? It revolves around a new character who’s involved in a rather interesting faction that is in the process of turning culty. They’re going to have a big role to play in the proceedings. I eventually figured out that I was experiencing a weird kind of shyness about going for the gusto with this new character.

Once I realized that was going on, I took a few days off and went back and read through a boatload of material on the Manson family. Particularly court transcripts, court videos, and a bunch of videos with Squeaky Fromme, Patricia Krenwinkle, Susan Atkins, et.al. There is a gestalt to cult movements at a certain stage of development that is very difficult to get right, and it’s one I used to be very familiar with. Somehow, I’d lost touch with since leaving the San Francisco area that I reconnected with, and that re-invigorated my culty characters.

Once I finally broke that dam this morning, the words started flowing. I wound the day on a really good note, left myself in a great place to pick up tomorrow, and rounded out the day by recording another ten episodes for the next block of the Nanocast.

Finally a respectable word count today. I made 3345 without really breaking a sweat. Now, to make that an everyday thing again.