I’ve been holding on to this one for a while. The following post contains geopolitics (not party politics), so if that bothers you, feel free to skip out.

Me, since I write books rooted in geopolitics? I’ve been rapt. I am not a citizen of the UK or the EU, and I’m not a resident, either, so I didn’t feel quite right about campaigning for either side of the current excitement. Those of you in the UK already have too many people telling you what to do–far be it for me to add to the confusion. I’ve only seen bits and snatches of the propaganda war going on over this campaign, but from this side of the pond, it looked pretty goddamn ugly all around.

Such is the case with heated issues in politics.

Anyway, now that the voting’s over, I wanted to post a few thoughts and predictions, in my capacity as a geopolitical nerd, history nut, and science fiction writer. So here goes:

The British Exit
Earlier tonight (in my time zone), the votes tallied up and something stunning happened: Britain, whose thinkers helped lay the groundwork for the European Union, voted to leave that same union.

It’s not the first time a country backed out of the long and meandering attempt to create a European superstate, but this is the first time that anyone that “matters” (geopolitically) has done it. Britain has the second biggest navy on the planet in terms of force-projection capabilities–without her, Europe’s future as a potential military locus of power is much diminished. She’s the second-largest economy in the EU trading block, and the fifth largest in the world all on her own. Leaving the European Union puts the EU’s future in jeopardy, and there are good historic reasons to fear an un-united Europe (such as the normative history of a major continent wide war twice a century for the last thousand years, resulting in untold wealth destruction and loss of life).

England’s exit from the EU will be painful, and probably acrimonious. In the lead-up to the vote, there were threats lobbed over the English channel from the Germans, from the EU leadership, and from all manner of continental thought leaders about how isolated and enfeebled Britain would become should she decide to leave the EU. The US President even made a special trip to exhort her to stay in the union.

The stakes were high. But I think they’re a lot higher than the risk of an economic downturn or a Britain adrift in a sea of inhospitable international relations.

I’ve been biting my nails over this one, because I think that as far as European civilization in the eastern hemisphere is concerned, today’s vote was probably the most important day in the century.

So, when the numbers came in, and they finally declared that “Leave” had won the referendum vote…

I cracked open some very smooth Scotch and had a celebratory tumbler.

Wait, WHAT?
A few of you, particularly folks I know in Scotland and Europe who comment regularly here, probably can’t believe I just said that, so I’d better explain.

Like I said, I didn’t get the full force of the Leave propaganda, or the Remain propaganda. I watched the debates I could find on YouTube between Clegg and Farage and others, and checked their numbers as best I could, but ultimately my cheering for “Leave” didn’t have anything to do with the “Leave” campaign’s stance on immigration, and very little to do with its stance on national sovereignty.

My reasons for supporting “Leave” are, actually, pretty damn weird, and it all has to do with birth rates.

Demography and Europe
Any modern social democracy or mixed economy is predicated on one simple, single fact: There are more young people than old people.

Older people at the top, younger at the bottom–males on the left, females on the right. Each age group’s population is measured on the horizontal axis.

This is what your demography has to look like if you’re going to run a modern economy, because modern economies have consumer-led growth, high levels of reinvestment by older employees, and pension funds and other welfare benefits that are disproportionately used by the old.

Young adults (under 40) consume resources, providing the driver of economic growth. There are a lot of them.

Middle aged adults (40-65) earn a lot of money and pay a lot of taxes. They provide financing for the government and the welfare state. They invest heavily for retirement, which creates the capital base that supplies younger adults with loans to start businesses, and to buy cars, houses, etc. There are fewer of them than young adults, because people die from car accidents and illness from time to time, even in their prime years.

Old people (over 65) draw money out of the system. When they retire they convert their high risk investments to cash and bonds and other low-risk stuff, which takes their money out of play in the credit markets. They don’t earn an income after they retire, so they don’t pay much tax. They don’t spend much compared to younger people. They receive their national pension (in the US, this would be Social Security and Medicare). And they can do all these things because there aren’t many of them–any healthy economy can spend lavishly on its old people and not feel a dent.

And thus, the world keeps going round and round.

Well, that’s the way things are supposed to be anyway.

Unfortunately, that’s not how things are anymore. Check out Germany’s current demography, for example: 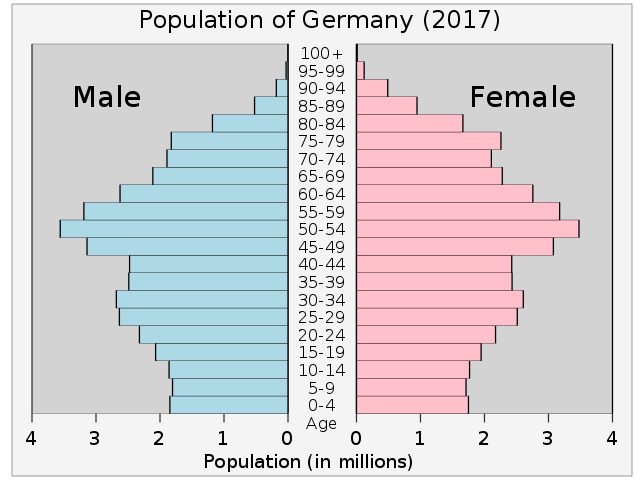 Germany is the biggest economy in Europe. And, as you can see by reading the pyramid, their skilled labor is starting to age out and retire, and they have no replacement population. Even worse, their consumer class, already so small that the country is subsisting largely on exports, is aging out of their prime consuming years.

Without economic growth, you can’t maintain a modern state. Period. End of story.

It Gets Worse
The entire European continent is a collection of social democracies predicated on this demographic model. And without exception, the other countries in Europe all have inverted demographies like Germany (where there isn’t a replacement generation worth speaking of). Some of them are in slightly better shape (France, for example), and some are in Germany’s shape, but a few years further along (Greece, Spain, Portugal–hey, didn’t I see these countries on the bailout-seekers list?). But all of the EU, as well as Eastern Europe and Russia, are heading the same direction.

In fact, there are only a handful of countries on Earth that aren’t in that position. Two developed countries(the US and New Zealand) have healthy demographies (barely). Others, such as England, Argentina, and Mexico have only slight inversions going on, and have good access to ocean transport and (either natively or through trade that doesn’t depend on Europe) food supplies, such that they will be able to sustain growth enough to stay solvent and relatively prosperous.

But countries like China, South Korea, Russia, South Africa, and entire regions like the EU, are already in decline–and it’s a terminal decline. After about 2022, these countries won’t see economic growth surpassing their most recent high-water mark for between twenty and fifty years.

To Sum Up
In other words, not to be too dramatic, the EU is doomed. The cascade of governmental defaults that began with Greece and Spain and Portugal will continue to creep northwards. The refugee crisis will get much worse before it gets better, as southern Europeans flee north to find jobs, joining the groundswell of refugees from the Middle East. Every solvent country in Europe is going to be stretched and stressed over the next ten to fifteen years, and it’s going to be a big stress.

And, yes, there could be another European war. I don’t know how likely it is. I hope we won’t see it. But Russia, under similar demographic pressure, is already on the move, and Poland (along with six other countries) is in the way of their strategic objective to preserve their borders before their own demographic inversion makes it impossible to staff an army large enough to defend their borders.

This is all happening whether the Brits had voted to Leave or Remain. The difference between Leave and Remain is British autonomy when the shit hits the fan. A Brtiain that Remained in the EU would go down with the ship as Europe’s demography implodes. An independent Britain, unhobbled by bailout obligations, might be in a position to help her friends in Europe.

Or, at the very least, to stay afloat herself and keep the candle burning, so that Europe might get rebuilt yet again, to be even bigger and better than she was.

My long-term outlook on Europe and the world in general is very bullish. There’s a LOT going on that bodes VERY well for the long-term future of humanity. Unfortunately, one of the side effects of uplift is periodic turmoil. This turmoil will come as a side-effect of an unprecedented seventy-year European peace (peace and prosperity drive down birth rates, always) and an unprecedented level of material betterment (computers, good medical care, and birth control pills also seem to drive down birth rates).

But Europe will adjust. As will Canada (which is facing a similar crisis, and sooner). Humans are a resilient bunch, and the next set of social institutions we design might just be built with a stable or variable population in mind. Sure, it’s a new problem, it’s not something we’ve ever had to worry about before, but so were nuclear weapons, and we’ve managed not to nuke ourselves yet.

Congratulations, Britain! May you survive the turmoil with characteristic British splendor!

Oh, and Scotland? If you want to ditch the UK and re-join the EU, I’ll root for you too. Not because I think the EU is a great idea, but because, American that I am, I think that any people ought to have the right to decide who it is they want to rule them.

Come to think of it, that’s a pretty British attitude, too. And now that they’ve executed that right for themselves, they ought not complain too loudly next time you have a go at it 😉

Be well, everyone. And as the news goes ape shit in the next few weeks, remember the words of a great British author…