Hello and greetings and updates from the road! Growing up in the San Francisco area, I learned to hate humidity. Going to the east coast or the south or the midwest meant growing a set of gills. 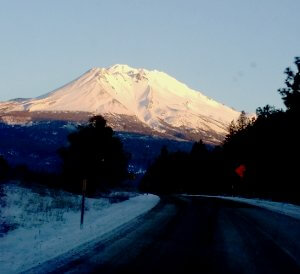 On the upside, at least Shasta has snow on it now.

After two years on the Oregon coast, now that I’m on the road for the next few months, I’m dying from the dryness. I wake up every morning wondering how my voice is possibly going to work when it feels like beef jerky covered in congealed pine pitch. I think I am personally keeping the tea industry in business with the amount I’m drinking just to stay functional.

Not that it’s all bad. In fact, if I’m honest about it, that’s pretty much the only bad thing on the slate right now, other than so much work to do.

For those of you just joining our odyssey in progress, The Kabrakan Ascendancy is the new name for the series of books that podcast (sporadically, at the moment) as The Antithesis Progression, and I’m blogging the progress as I write–and, because life has made the writing very sporadic, I decided only to blog the days I actually wrote (to avoid filling your lives with a bunch of “well, didn’t get to write today” posts).

Turns out that decision worked a little too well, and in the madness over the last few months the blog slid completely off my cracker.

So, here are some general updates on the state of play with everything Antithisisy, Kabrakany, and me-ish.

To start with, here’s a quick recap of the changes emerging between the two versions of the series, so far:

Uh, actually I haven’t talked about that last one. I’ll get to that in a little bit.

Meantime, I am on the road doing client work. Originally I had planned to just take a couple months out and power through, then I’d start writing again once it was done.

Well, that didn’t work out too well. Some years, things hit big, and this year is one of those years. I’ve got more work to do than I could do in my set-aside time, so for the last few weeks I’ve been spinning back up on normal operations as a writer and podcaster.

In my case, that’s meant:

July?
Yes, July. And August. And September. And October. And November. And December.
Six books in six months to close out this series–the biggest series I’ve written to date, which is essentially a six volume novel.

Standing in the way of this schedule is the fact that, after years of trying to find the kinds of books that would suck me in and not let me go, I’ve stumbled on to a whole pile of them. This week so far I’ve been sucked in to three books that ruined my life in the best ways. One isn’t released yet (but I’ll tell you when it is), another I’ll tell you about in tomorrow’s blog. Today, though, I’ve got to warn you again about an author I’ve been talking up a lot lately:
Greg Iles.

I’ve now read six of his eighteen of his books, and I’m pretty sure I’m going to wind up reading them all. Let me tell you how good this guy is.

The one I read this week is filled with things I hate with a white hot burning passion.
To whit:
1) It’s an “issue” book. Iles doesn’t usually do these, and I hate them. I can’t stand being preached at by a fiction author. I want to be provoked to think, sure, but not manipulated into adopting their pet moral crusades. This book does that in spades–and yet it’s amazing even so.
2) It’s a pseudoscientific shitshow. The main character is a forensic odontologist–easily the worst-supported field in all of forensic science. Despite being popular since the Bundy trial, it reliably produces results that are less reliable than blind guessing, and it pisses me off seeing it treated with respect in front of people who might one day be called to serve on juries. Bloody irresponsible of a writer if you ask me.
3) The whole book turns on recovered memories of traumatic events–another form of modern witchcraft (this time practiced by irresponsible psychologists) that does nothing but ruin people’s lives and liberties. Trauma just doesn’t work that way, and giving it credibility in public again, just when it was falling off the map, is a reprehensible act in my not-so-humble opinion.

But here’s the thing. The whole book is swimming in those three elements I hate with a white-hot passion, and yet it is so damn good that I couldn’t put it down (literally–I read it in one and a half sittings, and only did that because I fell asleep and it fell on my face because I couldn’t let it go). It’s that good. The book is called Blood Memory, and it’s a hell of a ride. Great characterization, fantastic plot twists, a wonderful set of moral quandries set up in a maze of emotional darkness. Just mentally categorize it as “fantasy” any time anything vaguely scientific comes up, and you’re looking at a balls-out masterpiece. 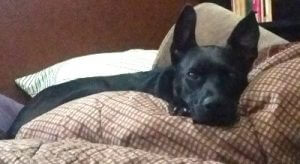 Can we play now? Huh? How bout now?

When I’m not being held down and punched in the face by an excellent book (or writing my own stuff or recording one of the stack of audiobooks I still have to get through) I’m getting my exercise by re-landscaping a friend’s back yard and running the dog until she’s tired(which is no mean task when you’ve got a Belgian/Dutch/something mixed shepherd, let me tell you!). I’ll have pictures for you of that project as it motors along.

Meantime, here’s the damage on The Briggs Defection (i.e. Book 1, or “the new prequelish book that takes place in between chapters 1 and 2 of what used to be Predestination):