Yesterday, I promised you an update on the other book I read cover-to-cover this week. It was one that–like the Iles books I’ve been raving about the last few months–dragged me straight through in one sitting (well, okay, one and a half). This one wasn’t Greg Iles, though, but another new-to-me author, Michael Connelly. I’ve been wanting to try Connelly ever since I got hooked on Bosch, the Amazon Prime streaming show which is, frankly, stunning. But the only Connelly books I have on my shelf are 1) later entries in the Bosch series that people have given me, and, try as I might, I haven’t been able to get into them regardless of how much I’m loving the TV show. Also they’re 2) in boxes and not with me at the moment. So, after determining that my library’s ebook service didn’t have any more Iles books I haven’t read yet, I looked to see if they had the first Bosch book. They didn’t.
But they did have the opening book from Connelly’s other big series, The Lincoln Lawyer, about a skeezy defense attorney in LA with an unconventional code of ethics. I decided to give it a whirl, seeing as how I’m a big legal procedure nut and Connelly has a reputation for impeccible research. The book is called (appropriately enough) The Lincoln Lawyer, and it is fantastic. The story is well done, the characters well drawn, the twists nice and twisty–not as surprising as I’d have liked, but I think that’s because I’m a bit twisted in the same direction as Connelly himself–and the jurisprudence was spot on.
Perhaps this is obvious since I write reference books for other writers, but I really really dig good research in the fiction I read, especially on subjects where I have more than a passing familiarity. Since I’m a major autodidact and a serious nutcase, the list of subjects with which I don’t have a passing familiarity shrinks every year, which means my bar for fictional verisimilitude gets higher (independent of the writing quality), and this basically means I’m no fun at parties because I’m trying very hard not to be an insufferable pedant. 😉
So when an author clears my verisimilitude bar on subjects close to my heart (in this case, jurisprudence, criminal justice, social predation, and the microeconomics of criminal enterprise),

Demon Dog wants your soul–or a ball. Balls are good. On second thought, forget the soul thing and put down that stupid book and just throw the damn ball already.

AND that same author tells a kick-ass story that grabs me by the balls and won’t let go, then that author earns a special place in my pantheon. Connelly just did that with The Lincoln Lawyer, and now I’m determined to go back and give the Bosch books another try, once I find book 1.

I also had to contend with the demon dog who wants keeps trying to use her ball to steal my soul. She doesn’t like it when I read, because then I’m slower to throw when she returns the ball.

Meantime, I’m already neck deep in another book, this one nonfiction and vital to finishing the Kabrakan/Antithesis series–which I’ll tell you about tomorrow. (These book review cliffhangers are as much for me as for you–it means I HAVE to post tomorrow, and that means I HAVE to write and read tonight).

As for the rest of the day today (well, yesterday by the time you read this)? Busy. Amazingly busy, actually. There was a birthday in the family, which always eats up a big chunk of time–not that I’m complaining, because it also means an excuse to relax a bit and (in this case) eat some sushi.

That doesn’t mean it was all play and no work, though. I took a great deal of time in the booth to finish recording the audiobook for Business 101, so that’s now in the post production queue and should hit the market in a few weeks here. 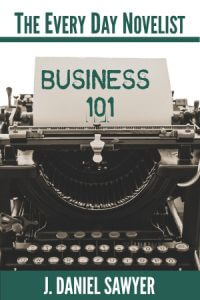 I also recorded a few new episodes of The Every Day Novelist including an interview with the proprietor of Bundle Rabbit, which so kindly sponsors the show. And I got started on the next client audiobook I’ve got to do.

Client audio? Yup. I haven’t done that in a while, but I wound up getting a stack of offers to do audiobooks right when we at AWP were making the decision to go on the road and do the documentary we’ve planned (which you’ll be hearing more about in the coming weeks), so instead of turning the offers away I took them–not only could I actually make the time to do them, but I needed the capital to finance the BIG PROJECT.

So far this year, I’ve done four client audiobooks. I’m starting in on the fifth, and I’ve got five more booked after this (not including my own audiobooks). This basically means I’m in the booth every day that I don’t have a cold or the wind isn’t blowing so hard that it makes recording impossible. (By the way, if you–yes, you, the one reading this– are looking for someone to do an audiobook or two for you, I’ve still got a couple slots left on my calendar for this year, so send me a note.)

The birthday, unfortunately, ate up my exercise time, so I didn’t make any progress on that landscaping project I hinted at yesterday, but I did get my reading time and some writing time in.

The reading time I’ve already told you about. The writing time was…anemic. I only got about 1500 words done, which is frustrating. I’ve been out of the groove long enough that I’m having to work back up to the 3k-5k/day range.

However, I did bust a major problem with the story. It turns out that there’s a 15k word sequence that I wrote out of order without realizing it. I thought it belonged at the end of Act 2, turns out it belongs at the end of Act 3. Having it in the wrong place had ground me to a halt and was one of the reasons I didn’t work harder to get back to the keyboard sooner. I should learn to pay attention to that. Any time I’m having trouble sitting down, it always turns out that there’s a problem with the story that my subconscious has caught but that my conscious mind has no clue about.

Anyway, moving that chunk made all the difference. Two hours of to do 200 words, then I moved the section, and I suddenly did a further 1500 or so words in about 40 minutes. So, I’m expecting tomorrow to be a LOT more productive, at least in terms of words-per-hour.