In today’s edition of Dan’s Nutty Life Story, we bring you an educational resource, a book review, a cute puppy picture, and a cover reveal (not necessarily in that order). 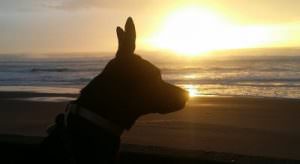 Trixie Misses the Beach, Too

Third day in a row when it was almost too hot to sweat. Never let anyone tell you different: fans are not a human invention. They are a gift from the gods–probably from lesser gods who were getting back at the greater gods who decided to inflict heat waves upon the Earth, but hey, I’ll take it.

Days like today, I miss the beach more than I thought anyone could miss anything–and I’m saying that as someone who had to suffer through 20 years of no Star Wars only to be rewarded with The Phantom Menace.

My Greg Iles streak continues with Turning Angel, the second book in the Penn Cage series. As good as most of the rest of his books have been (there’s only been one real turkey so far), these hop two levels from “wonderful” to “positively divine.” This one kept me up all night, again–read it in a single day when a migraine knocked me out a week and a half ago and I was running on a lean mixture for a while. These books have a thematic depth, an intelligence, and a deep appreciation of the complexities of life that I don’t normally see in fiction–and this despite the fact that all the characters in the book are…well…fairly ordinary people with the kind of generally blinkered natures that all people generally have. In spite of the constrained point of view, the whole winds up being so much greater than the (already impressive) some of its parts. A sex scandal at a high school, a murder investigation, a drug cartel, corrupt small-town politics, and a creepy statue all melt together until they’re transmuted into a book that reads so smoothly that it almost feels like a tone poem or an old southern spiritual sung by Nina Simone. Iles gets setting and character in a way few other authors do–it shows when he’s writing thrillers, but it shines in these more patient books (which still will keep you turning pages as if you were reading a breakneck thriller). There’s more than a hint of family saga going on in this series, which I’m digging since I’m writing a sprawling interplanetary family saga right now–and I’m picking up some interesting tricks as I read, too.
Highly recommended — five stars of five. If you haven’t read the Penn Cage books before, start with The Quiet Game and move on to Turning Angel, but definitely see your way through to Turning Angel.
Me? I’m rationing myself and holding off on book 3 for a few weeks, so I can make the deliciousness last.

This Week in Education

The major reason these books have taken me so long to write–or, really, so long to become a good enough writer to tackle them–is that they’re so tied up in geopolitics and deep history, and I’ve had to get a hell of an education along the way.

And I’m still getting it. Education is one of those never-ending things.

Today, while I was working, I listened to the audiobook of The Story of Civilization (it’s been a few years, I need a brush-up) and some startlingly good lectures. For those of you that like the things I’m doing in this series and are interested in another look behind the curtain, here’s an excellent lecture I watched today analyzing the historical and sociological underpinnings of the current goepolitical disorder (warning–you may find it a bit disquieting if you’re not a geopolitics geek):

Normally when I finish a book, I get some serious project drop.
Not this time. Yesterday I was flying high on the completion, and used the energy to get a bunch of recording and administrative work done (such as getting the book shipped off to the beta readers)–today was my second (and final) day off between books, and the entirety of the day was devoted to recording and putting together the cover art for The Briggs Defection.

And now, I proudly present you with the cover for volume 1 of The Kabrakan Ascendency.

Remember to email publisher at artisticwhispers dot com to become part of the street team and get an Advanced Review Copy. Get the details here.