Today marked one of the great transitions. I closed out the last of the big client contracts that I’m performing audiobooks for, which means that I can get back to work on reading my own books and–more importantly–writing my own books.
I’ve discovered that living in other people’s books as a performer puts a serious cloud over my creativity, so in the future I’ll be scheduling such work more selectively (and, more importantly, with breaks in between).
Now that cloud is gone. The next few books I’m contracted for I’m just working as a producer (or I’m doing my own), and I’m back to writing.

And man, oh, man, does it feel good. I’ve done two chapters tonight (half fresh writing, half revisions), and I’ve got a clear field and schedule for the next couple weeks that’ll let me put the rest of this book to bed. 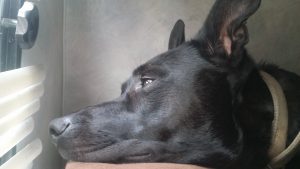 Trixie keeping watch on the neighbors

She’s sleeping under my arm as I type this. She was there the last few hours as I was writing. When I was ten years old, I wrote the bulk of my first novel-length work with my cocker spaniel curled up, head on my lap, body tucked under my right arm. It’s a spot that’s been empty for a lot of years since I put her down back in the mists of ancient time–so long I’d forgotten about it until tonight when Trixie climbed up on the office couch and tucked herself under my arm the same way that other lady way back when used to do.

The Orinthal Deception is a book about a tenacious woman with the power to move the world. It seems appropriate that it’s being written between the watchful ears of one of the most fantastic bitches I’ve ever had the pleasure to play fetch with.