The Saga Of The Hat 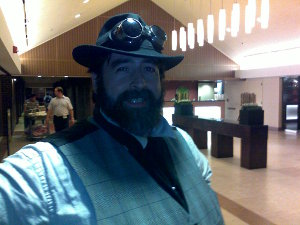 At this point in the narrative, I’m forced to chose between one of two roads. I could go along the chronology, skipping the boring and blackmail-worthy parts along the way, or I could chose a theme and tell its story…or I could jump back and forth between each as my fancy strikes me.

Guess which one I’ve picked?

It wasn’t until my appearance on Litopia last December that I began to realize the Power of the Hat ™. First, there was the encounter I recounted last time with Kim the Comic Book Goddess (who insists she’d have recognized me without the hat, but I have my doubts). Then there was the fact that Scott Roche and Sidfawu accosted me based solely upon the Power of the Hat, and we wound up sitting in the bar for several hours on Friday night talking Down From Ten, writing, and what passes for politics in my demented corner of the universe.

But before all that boring stuff, you’ll want to hear The Good Parts. 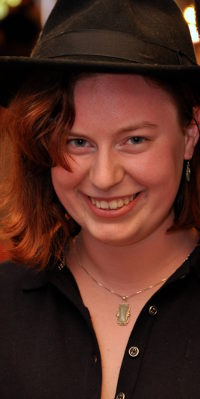 Much to my surprise, I arrived in time for my appearance as a guest troublemaker…um…panelist on The Good Parts, during which time we talked with great seriousness and deliberation about the influence of Catholicism on Erotica, Erotica markets, why Erotica writers are more conservative than mainstream fiction writers, and why J. Daniel Sawyer can’t resist telling a bad Vatican joke whenever he gets the chance (ok, we didn’t talk about that, but I’m sure that’s what you’ll be wondering after you listen to the ‘cast). The terrifyingly intelligent Kathryn Lively of Logical Lust/Mundania Press joined me as a guest and mutual foil to Nobilis and Cynical Woman’s normal crosstalk. It was a lively session indeed (pun intended), but I did manage to escape with my politically-incorrect (from any point of view) skin intact to take refuge once again in the bar, where I was accosted by the aforementioned shady characters. Gail found me there, drowning my sorrows in iced tea and talking epistemology, and while she and I sat talking Mur Lafferty wandered by.

The host of I Should Be Writing and editor of Escape Pod — drawn by the power of the hat (okay, the fact that I had her favorite ever show guest on my arm probably didn’t hurt, but it’s my hat and I can fetishize it if I want). After a delightful introduction, Gail and Mur flitted off with the New Yorkers to talk shop, while Nathan Lowell and Scott Roche introduced me around. 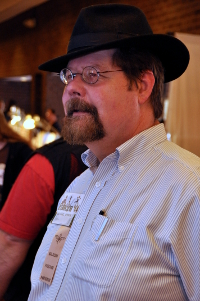 And this, dear reader, is where the Hat shows its true power. I was shaking hands with…Mae Breakall, I think? I can’t remember who, honestly, because I heard behind me “Oh my god it’s Dan Sawyer!” I turned around just in time to catch a short grey-shirted bundle of energy running up to hug me to death. Once I was satisfied that death was not in the cards, I collected enough of my wits to introduce myself to, it turns out, Heather Welliver, whose voice (I’m proud to admit) stole my heart in the intro to Pieces, and who graciously appeared in Predestination as Shayna Takahashi, and who is every bit as fabulous in person as she is on pod.

My welcome the rest of the con was similarly warm (thankfully, not in the thermal sense – the air conditioner was a life saver) and shocking, but none of it was matched by the dirty, foul, evil prank played upon me by podfather Tee Morris, he of the shameless self-promotion. Tee, in what I can only assume was an attempt to keep me on my toes, put out a twitter bounty on my hat. Over the course of the con, a number of people hunted me down specifically to STEAL my hat.

Let me say that again.

THEY STOLE MY HAT.

And then forced me, when I had a camera handy, to take their picture while wearing it. Theft and extortion, all in one package. And I have only one thing to say about this:

Your ass is mine next Balticon, Ubernemesis!!!

And yes, I’ll be posting more pictures from the Great Hat Heist in coming blog post.

Believe it or not — this only covers up through Friday night. Saturday was a whole other adventures.

Next time: Ponfication, Panels, and Parties