Well, I suppose I’ve put it off long enough. The summer since Balticon has been packed to the gills with activity. Lots of writing, lots of strategizing. 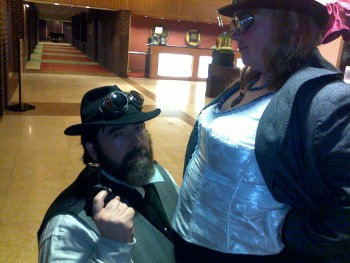 I don’t think I’ve read as much in one summer in at least a decade, and I’ve written 150k words and still going—might even hit 350-400k for the year by year’s end, if I budget my time right.

But I can’t put it of any longer—needs must, and I have to move on from Balticon to the next grand adventure, so I endeavor to finish this story.

Saturday began with an argument. The clock wanted to convince me that it was almost time for my first panel. I told it that it was full of shit and really needed to get a life. It countered by telling me I now had one minute less than I used to, so I’d better get my ass moving.

By moving, I mean that I needed to get showered and then contrive some way to dry off in the 80% humidity, then get into my semi-fancy duds (I actually tried to get into my fancy duds, but three seconds after I got into that monkey suit I found myself developing a seriously advanced case of heat exhaustion, so I immediately stripped and re-evaluated my options, settling on the disreputable getup I appeared in, with minor variations, all weekend, on the grounds that it was the only set of clothes I brought that was anywhere near livable in that god-awful swamp heat that east-coasters think of as “nice weather.”)

I actually managed to make it downstairs in time to grab something resembling breakfast (by which I mean a glass of iced tea and a handful of strawberries), before stumbling blindly into the Audio Masters Workshop scheduled for the purgatorially early hour of 9:00AM (which, for those of you keeping score at home, is 6:00 AM by my body clock, a time when I’m more normally deciding it might be a good time to wrap up my writing for the night and get some shut-eye before my regular noontime mixing appointment).

Nonetheless, under the guiding hand of Chooch Schubert and alongside the erudite John Taylor Williams, and the slightly insane but always entertaining Arioch Morningstar, we engaged in a mighty staggering jaunt through the world of audio tech and technique, much to the bafflement and occasional entertainment of the packed audience, many of whom seemed just as flummoxed by the earliness of the hour, low blood sugar, and the shocking lack of iced tea as I was (or perhaps I’m projecting).

Fortunately, I escaped with my skin—even took a chance to plug Brass Farthing, the fabulous mostly a-capella group headed by George Chlentzos, who plays Doug Reeves in The Antithesis Progression novels. I slipped away to the bar, where I acquired something approximating food (good food, if typically overpriced) and bumped into P.C. Haring, who was most kind in showing me around the hotel where I hadn’t quite got my bearings yet.

First stop: the Dragon Moon table to sign a few copies of The Podthology and harass Tee Morris, Pip Ballantine, P.G. Holyfield, Chris Lester, P.C. Haring, Michael Spence…actually, come to think of it, a good sized chunk of the universe started congregating there shortly before I arrived. There were the obligatory hat photos, book signings, and body part signings…ah memories…but I digress.

Enough of the universe was there, in fact (and, thanks to Senor Ubernemesis, stealing my hat), that I nearly ran late for my next panel, the one I’d been dreading. Ever since I’d seen it on the program, I was sure that I was walking into an ambush. Why would I think that? Well, the panel was called Is There Room In The Fridge, Hon?, and I was the only male on the panel.

Yeah. Kim the Comic Book Goddess, who put the panel together, obviously had it in for me. Revenge for the cliffhanger end of Predestination, no doubt. What else was I to do? I pulled my brim low over my eyes and girded up my silk brocade vest, put my cell phone on vibrate, and marched in there expecting the worst.

And it turned out to be a hell of a panel. Not revenge for Predestination, but quite the opposite—there were a lot of kind words for my particular efforts to subvert the Women In Refrigerators trope, and the conversation turned into a delightful talk about the different ways authors use characters as naked plot devices, and how sexuality plays into character development even in g-rated stories. When the audio comes up on the Balticon Podcast, I recommend it.

The remainder of my afternoon consisted mainly of sitting in the bar and having long involved debates over skepticism, economics, and the proper place of Tribbles in a kinky geek life—that last one got kinda messy. Don’t ask. Suffice it to say that I nearly missed the next panel, Chris Lester’s Metamor City Live show, during which I played Artax, sans accent.

In my defense, I actually did practice the accent on the plane between G-Rated Fight Club showings, but the moment I walked into the ninety-degree-plus media room all ability to do an accent left me. Did I mention that I have an uncomfortable relationship with heat?

The rest of the evening—and weekend, for that matter—is a hell of a blur. P.G. Holyfield, Nathan Lowell, and Patrick McLean’s hysterical launch party. A delightfully disreputable incident involving Mur Lafferty, Paulo Bagipliuci, Gail Carriger, a number of martinis, and passers by giving us dirty looks. I also engaged in a couple impromptu Leonard Cohen concerts—first in a round robin group setting with Kim Fortuner on piano, and then later on in a trio with Phil Rossi and Starla Huchton. In both cases, loads of fun, both for the singing itself and for the shocked looks on people’s faces who didn’t expext that a gruff looking hobbit could actually sing (they obviously haven’t seen the Rankin Bass production of The Hobbit).

Saturday and Sunday night, both nights, I snuck up on the sun from behind (and, really, if you *have* to interact directly with a gigantic fusion bomb, the best way is to sneak up on it from behind). Saturday, it was in the courtyard with a crowd of folks I’d barely met before, excepting Starla and Chooch. I don’t remember a lot of it, to be honest—jetlag has interesting effects on the brain, but there were a lot of wonderful songs, including a quite striking original composition by Starla. 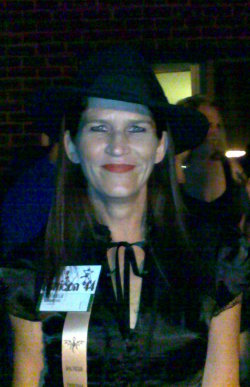 Sunday, Chooch and Viv hosted a party in their room (and on their lawn, much to the chagrin of the neighbors). Like in Hotel California, some drank to remember and some drank to forget, but I smoked an excellent Rocky Patel with Sheila Dee while talking photography with Michelle Beckmeyer (who also stole my hat). I also discovered that I need to take out a restraining order against my evil laugh, which has developed a reputation of its own and became the subject of an interesting wager over the course of the party, somewhere between the cigars and the point just before dawn where I was talking about Stephen King with Paul Elard Cooley.

Also somewhere in the dark, there was a protracted debate involving Gail Carriger, Peter V. Brett, Kim Fortuner, and Paul Elard Cooley on the merits of historical fantasy and vintage Science Fiction with respect to feminism, but it was so rapid fire that I regret to report that it’s mostly a blur, and the witty ripostes must remain unrepeated and unattributed to protect the dignity of the participants (myself not least among them).

Monday’s harsh light found me stumbling my marginally-coherent way back to bed. The rest of Monday, well, that’s next week’s story.

Next time: The Voyage Home