Released: On Matters Most Austere | 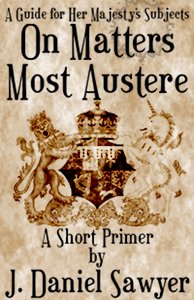 bouts of madness. In 2010 at OryCon, a particularly whimsical bout of madness struck. I’d just gotten out of a panel on Steampunk and run into someone with a table advocating for public awareness of something-or-other, and it occurred to me that in the world of the Steampunk genre there would be a number of such groups going around trying to cope with large societal changes caused by the sudden disinclination of their fellows to stay dead.

Magazine editors loved it, and sent glowing rejection notes apologizing to me that the premise was simply too weird for their readers. Now, it’s your turn. If you need a draught of the truly daft and funky, check out this Guide for Her Majesty’s Subjects On Matters Most Austere.

From the Greater London chapter of the Committee to Restrict the Accidental Population:

A comprehensive guide for Her Majesty’s subjects on dealing with the social problems and legal issues created by the so-called “accidental population.” If you are finding your world complicated by vampires, resurrectionists, or the undead, this pamphlet will give you the vital information you need to survive awkward situations with your life and social standing intact, and in the process restore the dignity of the Empire.

Read it now on your Kindle or other e-reader.