Guides to The Great Unraveling |

Those of you who follow my series The Unfolding World (often these are New Year’s Posts) will know that I’ve been talking in big terms about What Comes Next for the US and the world. I’ve said we’d better hold our nerve and that, if we do, we’re going to come out of this in a far far better state than we went into it.

Earlier this year, I added to that series with a rather dark post bemoaning the difficult and stupid ways that we’ve set ourselves up for failure heading into this crisis–which the COVID-19 epidemic has sped us into, though probably without enough momentum to bring the exit horizon any closer.

For the past decade, as this picture of the future has come together out of my research for the completion of The Antithesis Progression/The Kabrakan Ascendancy, I’ve also been skating to the puck in my personal life (one of the reasons the fiction podcast has gone quiet for so long) so that I will be able to continue writing, and podcasting, and advancing my other schemes during what I anticipated would be a protracted period of financial and social turbulence.

Part of this research has involved aggressive reading on economics, geopolitics, history, crisis management, and some other rather dry topics that could only be of interest to a science fiction writer–however, two books have come out this year that are aimed at a popular audience and that explain what’s going on and what to expect in very plain language. As a bonus, both are refreshingly disinterested (i.e. they’re not advancing a partisan or political agenda).

The third in Peter Zeihan’s series of geopolitical blockbusters for the everyday person, Disunited Nations begins with a brief recap of history since Columbus in order to introduce its key systems-analysis concepts, before launching off into The Great Unraveling. Tackling demography, geography, energy flows, imperial history, the legacy of the Cold War, and American psychology, he explains why the global system is unwinding before our eyes, to the point where it’s now not even a recognizable version of what it was during the 1990s or 2000s (hint: the reason it is crashing irretrievably has almost nothing to do with politics).

He further discusses the factors that make a country economically stable and successful, and much of the book looks across the world to figure out which countries will remain that way without the United States acting as an external security guarantor.

This book is a guide to the wars of the mid-21st century. It’s also a guide to the investment markets that might be available to Americans in foreign countries, and how to evaluate them. And it is, perhaps most importantly, a guide to the collapse of the global order and how its effects will be felt in different nations.

Consider it a geopolitical survival guide for the average citizen of the world. The writing style is irreverent and enjoyable, the information flow and delivery are excellent, and the actionable information is vast. I can’t recommend it–or his first two books–enough as a guide for the storms to come.

Get your copy of Disunited Nations here. Also, consider picking up its predecessors The Accidental Superpower and The Absent Superpower.

The Storm Before the Calm by George Friedman 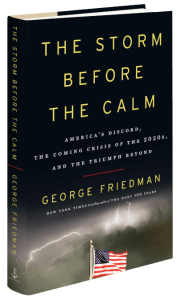 Where Zeihan’s book is concentrated squarely on the international scene, Friedman’s is focused tightly on the American home front. The first half of the book is an exploration of American history and the cycles that drive its development and precipitate its crises (a concept I touched on briefly in my article The Era of the Jackpot).
The idea of history being cyclical is as old as history itself. George Santayana said that those who do not remember history are doomed to repeat it–and a lot of other historians and fans of history have grumbled that he was an optimist in thinking that history can be goaded to refrain from repeating itself.

A view being old is no guarantee that it’s uncontroversial. Progressive and conservative historians alike tend to look askance at the very idea that history could have cycles, with progressive historians looking at the unfolding of the world (especially since the rise of science) as an onward-and-upward trajectory that has broken free of the old way in which civilizations and empires rose and fell with somewhat nauseating regularity. Conservative historians, on the other hand, see history as being propelled forward by the choices of outstanding individuals who are able to remake the eras they live in and permanently alter the course of events.

But, for my money, it was Mark Twain who first threaded the needle:

History doesn’t repeat itself, but it rhymes.
-Mark Twain

Because human nature doesn’t change, and because all things in the world have a life cycle, and because human social structures (including economies, bureaucracies, governments, etc.) themselves exhibit distinct and predictable stages of development–and because humans pass their knowledge, technology, and achievements on to their offspring which creates the ability to make progress—it follows that what we should actually find in a healthy civilization is iterative progress. In other words, cycles which lead in a progressive direction, like a spiral staircase.

Friedman’s untangling and explanation of the cycles of American history is explicitly informed by the critiques brought to bear by the progressive and conservative views, and he manages to encompass all three approaches solidly within his framework.

The results are…bracing, to say the least. After explaining how we got here and exploring the factors that drove the five previous eras of American economic history and the three previous institutional cycles, and the relationship of both to the geopolitical cycles they now drive (due to America’s position in the world), Friedman sketches a very sharp, well-articulated outline of the next decade-and-a-half of American social and political history and what it will mean to the different generational cohorts who must live through it.

As in the case with Zeihan’s book(s), the diagnosis is a good news/bad news situation. America is in for a hell of a rough ride as we shake of the malaise of the current cycle, and poised for a new golden age with its own very predictable failure mode on the far side.

Get your copy here.

So Why the Book Review, Dan?
For those of you in or near my age cohort (late Gen X), this is important stuff. It affects retirement planning, career planning, and some of our more innovative family structures (multiple committed partners, late-life child-bearing, late-life partnering, going it alone, etc.). Not all of those effects are bad or even uncomfortable (although some definitely are), but most-if-not-all of them are ones we were not trained for and that we might not expect a priori.

For those of you in a younger cohort, you’ll be either in your prime or coming of age in the next golden era, and you’d do well to make sure you’re prepared to take full advantage of the fact. This may include some mid-life career changes, which can be quite wrenching.

Most important:
This transition is baked into the system–we can’t avoid it. We can’t prevent it, not even with the perfect suite of responsible politicians or a benevolent dictator who agrees about all the important things. The series of events hasn’t yet reached the point where politics can even be part of the solution, even though eventually it will. Zeihan’s book attacks this from one angle, Friedman’s book from another. Both explain the timing the reasoning in some depth, and it accords with conclusions I had reached earlier through my own research, for many (but not all) of the same reasons.

But if we cannot avoid it, that doesn’t mean we cannot survive it. Forewarned is four-armed…um, fore-armed.