So. copyright infringement has been a a hot topic over the last year, as numerous high-profile and/or much-blogged about cases have been circulating in the news. Whether it’s Star Trek fan films or shadow hunting urban fantasy heroines, a lot of people are in a hell of a lather about people “stealing their ideas.”

The trouble is, you can’t actually steal an idea. Or a design. Or a ritual. Or any of the “things” that most people tend to think of as the atomic structure of culture, because absolutely none of that is copyrightable. Story ideas are as easy as James Bond on three martinis, and cheaper than the stuff you flush down your toilet every day.

When it comes to creativity, a great idea is an inert form of matter. It’s so inert that it comes close to being a meaningless concept. Stories (and, indeed, all other forms of human creativity, from invention to music to scientific discoveries) come from the collision of ideas, and they’re only copyrightable in a particular form or expression.

For example, it came to my attention recently that someone might have actually “stolen” one of my ideas. Actually, a lot of my ideas. Check it out: 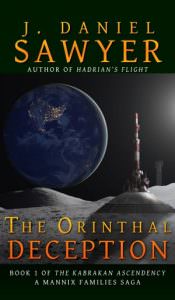 My science fiction spy series which podcasts as The Antithesis Progression (soon to be re-published in print as The Kabrakan Ascendency) is centered around the havoc wreaked, empires toppled, and conspiracies unmasked by a guy named Joss Kyle.

(By the way, if you haven’t read through book 2 of my series yet, be warned, there are some minor spoilers below).

Joss is a reserved, fairly soft-spoken balding man in his late forties or early fifties, soft around the middle, and with a predilection for natty hats and overcoats. He has an irresistible love of strategy and mind games, and is terrifyingly good at finding and exploiting people’s weak points. He uses those weak points regularly to leverage very dangerous people into his service during casual conversations.

He started life as a college professor, became an intelligence analyst, and eventually became the National Security Advisor. During his intelligence career, he gathered evidence that some high-ranking government officials were in bed with a foreign power for complicated reasons involving commerce, geopolitical status quo, and religious tensions.

When one of the people in this network of powers got wise to Joss’s investigation, and put a price on his head, Joss fled to the criminal underworld. There he discovers a singular talent both for violence and brokering deals between other criminals. Through various misadventures, he becomes a powerful, if ghostly, international (and interplanetary) crime lord, eventually aided by a devoted (and heavily accented) Nigerian expatriate named Mondu who has his own reasons for helping Joss in his fight against the dirty politicians and their criminal network.

Eventually, Joss co-opts the services of a younger, dark-haird female PI who was assigned to capture and subdue him, and whose marriage is on the rocks after a breach of trust while trying to locate a lost child.

Together, they go on the lam to prove the existence of the conspiracy Joss uncovered, in the hopes of preventing a major world war and protecting the liberty of the people whom the conspiracy threatens.

In the process, they are both implicated in the murder of a high-level government official while chasing down a rogue deep cover agent, and Joss manages to entangle himself with insurgent forces within the government and within the largest foreign crime syndicates, becoming indispensable to both while being hunted by their agents for the information he uses to ensure his personal safety remains unmolested and his personal power uncontested.

And that brings us right up to the end of book 2 of the series.

Now, having just read that, take a gander at this:

Raymond is a reserved, fairly soft-spoken balding man in his late forties or early fifties, soft around the middle, and with a predilection for natty hats and overcoats. He has an irresistible love of strategy and mind games, and is terrifyingly good at finding and exploiting people’s weak points. He uses those weak points regularly to leverage very dangerous people into his service during casual conversations.

After graduating the Naval Academy, he became a Naval intelligence analyst, and was on the verge of promotion to Admiral before he stumbled onto evidence that high-ranking government officials were in bed with a foreign power for complicated reasons involving commerce, geopolitical status quo, and international terrorism.

Because of this, Raymond fled to the criminal underworld, where he discovered a singular talent both for violence and for brokering deals between other criminals. Through various misadventures, he became a powerful, if ghostly, international crime lord, eventually aided by a devoted (and heavily accented) Sudanese expatriate named Denbe who has his own reasons for helping Raymond in his fight against the dirty politicians and their criminal network.

Eventually, Raymond co-opted the services of a younger, dark-haired female FBI Agent who is assigned as his custodian after his capture, and whose marriage disintegrates after a breach of trust when trying to adopt child. Together, they go on the lam to prove the existence of the conspiracy Raymond uncovered, in the hopes of preventing a global conflict and protecting the liberty of the people whom the conspiracy threatens.

In the process, they are both implicated in the murder of a high-level government official while chasing down a rogue deep cover agent, and Raymond manages to entangle himself with insurgent forces within the government and within the largest foreign crime syndicates, becoming indispensable to both while being hunted by their agents for the information he uses to ensure his personal safety remains unmolested and his personal power uncontested.

This is a description of the television series called The Blacklist

I wrote the first two books of MY series and published them both before 2010 (the next volume is coming out this year). Meanwhile, The Blacklist only appeared in 2013 and is ongoing right now.

And if you think those close points of comparison are bad? Well, it gets worse:

Both Raymond and Joss, at different points, offer themselves to the legitimate authorities as turncoats, selling what they know in order to gain influence over the very people who are hunting them, and using their new friends against their old enemies.

Both are classically educated, erudite, and darkly whimsical.

Both use their knowledge of personal and state secrets to weave a sense of mystery about themselves, in order to maintain their power over the women who become fascinated with them.

Both amass impressive wealth from their illegal activities, and use that wealth to make themselves invisible, unfindable, and untouchable.

Both are utterly ruthless, willing to employ extraordinarily brutal, criminal, and dishonest means to achieve a just world, protect the greater good, and preserve democracy.

Both are extraordinarily self-aware, fancying themselves outlaw amoral agents of a lawful and moral order.

Both have surprising scruples that shape their actions in ways that confound their adversaries and allies alike.

Many of the subplots and minor characters in both story-worlds exhibit striking parallels, as well.

Now, with all of that, you might expect me to pick up the phone to my lawyer and see about mounting a copyright infringement suit?.

Obviously, Jon Bokencamp (creator of The Blacklist) either listened to my podcast or read my books and decided to save some money on paying me an option to adapt my books to a present-day setting, right?

I can prove priority in the public record, and with that many points of correspondence my case should be a slam-dunk. It probably wouldn’t even go to court, either–Universal Television would just cut me a big check to make me shut up and go away. Maybe they’d even buy out the television rights to the book, just to stay on the safe side.

This is obviously a case of naked infringement. Right?

Well, no. While people have certainly gotten nuisance checks for less, and if I had the larceny in my heart to shake them down, and was able to find a similarly larcenous attorney, I might be able to make enough of a nuisance of myself to draw some “small pittance” (to a studio, which would be a bloody fortune to me).

But even if I got some money out of the deal, it wouldn’t have anything to do with the merits of my case.

But I have a problem. All of those similarities, with ALL those points of commonality? None of them are copyrightable.
None.
Not a single bit.

Every single one of those things in my book is something I stole from earlier bits of culture. The hat and overcoat and my stylish antihero are all drawn from my love of spy thrillers and detective fiction. The soft-spoken terrifying man came from a blending of Verbal Kint (as played by Kevin Spacey), Wilmer from The Big Sleep (as played by Elijah Cook Jr.), and the Russian Ambassador from The Hunt For Red October (as played by Joss Acklund, after whom I named my character). The strange power dynamic between Joss and co-opted PI partner Ali was drawn from several relationships in history, including one from my personal history. The ruthless amoral agent conspiring to topple his former allies had its genesis in a mashup of Julius Caesar and Thomas Paine. I could go on for another 500 words on my influences alone.

Jon Bokencamp, on the other hand, got his idea for Raymond Reddington from the Whitey Bulger trial–something that didn’t come onto my radar until well after I’d begun writing the adventures of Joss Kyle. A number of Bokencamps other influences are the same as mine.

What’s more, despite all those similarities, they are very different stories.

The Blacklist is a sensationalist, gritty political thriller with a breakneck pace and a very, very tight focus on four core characters.

The Kabrakan Ascendency is a sprawling, hard SF espionage epic with a large core cast and a lot of moving parts.

Where The Blacklist is concerned with the personal ambitions of certain characters, The Kabrakan Ascendency is concerned with how small characters change the course of large civilizations. So, it’s more Game of Thrones than 24, and it takes place over the space of decades, rather than over the place of a year or two. Sure, the two stories have similar themes, but we explore them in very different ways–and that’s all for the good.

It’s a simple fact of life that, in any large society with good information flow, different people will come up with very similar ideas and turn them into different things. It happens in the sciences, in the arts, and in the other humanities.

That’s how human culture works.
And that’s why you can’t copyright ideas.

As for me? I love The Blacklist, and I love The Kabrakan Ascendency. The world is big enough for both Raymond Reddington and Joss Kyle (and if you are a fan of either one, why not check the other out? I bet you’ll enjoy it!). The world is better with both, too.

So, next time you hear about a copyright lawsuit by some big studio against some fan film maker, or by some frustrated author against someone else who’s making money from a similar series, see if you can spot the undercurrent of They Stole My Idea!

If you can, chances are that the suit is, largely, bullshit.

Want more great chewy fiction filled with intrigue? Until October 6 you can get a whole shuttle-load full of Extreme Science Fiction, featuring spin-off novels from The Kabrakan Ascendency and great stuff from giants like Kristine Kathryn Rusch and Kevin J. Anderson. Get it now before it disappears.