I’ve often suspected that “JetBlue” is so named because of the color your legs turn in coach. Turns out that, like so many other things in the universe, I was completely wrong. They had more leg room than I’ve experienced on any flight in years – so much that I didn’t even get bruises on my knees from the seat in front. All this for the cheapest available tickets? Luxury, I say!

They also had personal televisions mounted in the back of each seat, ostensibly piping in Sat TV for our viewing pleasure. It was a special kind of SatTV, though, one designed to be suitable for children. Attempting to watch the G-rated cut of Fight Club was probably the most surreal experience of the entire weekend (which, in any weekend that contains people like Tee Morris, is saying a lot). 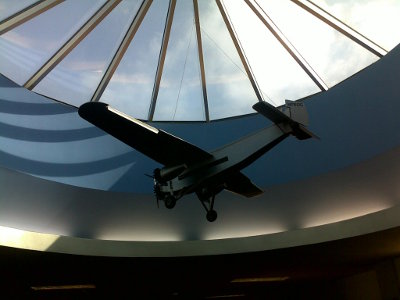 After an hour hop to Long Beach, we walked across the tarmac at the very retro 1940s airport to a trailer park masquerading as a passenger terminal. Once I had satisfied myself that I was not about to encounter dueling banjos and half-consumed kegs of Budweiser, I relaxed and took in the finer points of the architecture (what else does one do when waiting for airplanes?).

The Long Beach airport designers have put a lot of thought into constructing a homey space. Like my bedroom when I was seven, they hung model airplanes from the ceiling at just-over-collision-hazard-height. Also, in an attempt to maximize their budget while maintaining the homey feel, they had joined six mobile homes together, generating enough floorspace for everyone to stand around waiting for their planes in the finest possible Winnebago style.

The flight East proved equally roomy – hats off to JetBlue for the leg room. And the endless replays of G-rated Fight Club. Did you know that when Tyler Durden gets pissed off in kindergarten, he describes himself as “peeved”? Neither did I.

And now, I shall write a sentence that should never see the light of day: I am SO glad that I saw Die Hard 2. Looking out the plane window as we landed, I suddenly understood why a light afternoon sprinkle created a 40 minute landing delay: The ground crew naturally had to make sure the rainstorm wasn’t a terrorist plot. You never can be too careful (in fact, while I was in Baltimore the Insecurity threat level went from Lemon to Orange. They tell us if they make it all the way to Cherry, we get a free box of Fruit Loops. Me, I’m hoping the threat level makes it all the way up to Tangerine so that I can get a free pack of Starburst candies next time I fly).

Besides, no amount of G-rated Fight Club could prepare me for the experience of landing at Washington Dulles on a stormy afternoon. Exiting the gate and finding baggage claim was essentially a walking tour of one of the most expensive “things go boom” movies in history, and really, who needs a plot when you’re riding on an escalator that you personally watched Bruce Willis shred with an Uzi when you were in Jr. High?

Things were looking up…until we got outside.