Etiquette by the Full Moon |

A review of Soulless by Gail Carriger 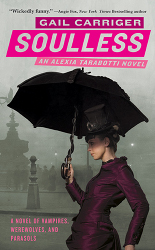 There is only one thing worse than having a soul, and that is not having a soul. Or perhaps having too much? I think I’m getting ahead of myself.

To backtrack, I just finished reading Gail Carriger’s debut novel Soulless, now available for preorder from Amazon and scheduled for release this October. An unusual genre mash-up that the author aptly describes as “Urbane Fantasy,” it combines fantasy, paranormal, romance, horror, mystery, steampunk, and Victorian comedy of manners in the same way one might expect of a veteran chef blending Chinese, Italian, and California flavor palates for a lark at a summer barbecue that is to say, the result is unexpected, surprising, delightful, and brings one up a bit short. Or, it would, if it weren’t for one of the best opening paragraphs I’ve read in a long time. The first chapter flies by fast enough that it’s not until the narrator pauses for breath in chapter two that the reader is left to puzzle over the curiosities of, say, a perfectly ordinary-seeming spinster with a weighted brass parasol encountering an unexpected vampire while having tea at a soirÃ©e. The fact that she easily dispatches said vampire, which lisps terribly and can’t seem to keep his fangs up when he touches her, resulting in a scene that positively screams “Buffy, you’re a poseur.” Alexia Tarabotti isn’t a vampire hunter or an angsty teenage girl, and her story is a cut or five above Whedonesque kitschy cuteness.

To backtrack further, Soulless follows the adventures of one Alexia Tarabotti, an independently minded Victorian spinster in her own special kind of hell. That variety of hell is, aptly enough, called “home,” where she lives with her two much younger, much less Italian sisters and a mother that can’t seem to utter three words without being dreadfully boorish or uselessly boring. To compensate for her unfortunate circumstances, Alexia enjoys hobnobbing with flamboyant vampires, needling the local werewolves, resenting her friend Ivy’s taste in hats, and reading until her socks turn blue.

Ms. Carriger makes a great use of romance formula – taking the basic template and subverting it well enough that, even when you know what *must* be coming, it’s often a genuine surprise when it arrives. She also presents the reader with the Victorian world as seen by the social-climbing London middle class. Normally, I find this angle on the Victorian world both suffocating and tiresome, but in this case it works to great effect. As this class historically subsisted on a worldview that was, in large part, fantasy, this turns out to be an apt basis for a novel in which Werewolves are responsible for the British Regimental structure and the Queen has a Shadow Cabinet made up of supernatural advisors.

Which leads me to my favorite thing about the book: it takes itself seriously. I mean this in the sense that there is a flawless internal integrity to the world, the characters, their attitudes, and the action. Far too often with period fantasy or romance (or drama, for that matter), the author delivers cosplay instead of integrity – that is to say, the characters act like contemporary people affecting period manners and forms, but without a genuine period-restricted worldview. As a history nut, this is a make-or-break issue for me – I’m hypercritical about it and will sooner put down a book with poor historical integrity than waste the precious moments of my life reading something by a careless author who can’t be bothered to get it right in the milieu they’ve chosen. Ms. Carriger’s world passes this test with flying colors, even as she works in dozens of sly nods to Austin, Wodehouse, Douglas Adams, and all manner of geeky trivia.

Alas, nothing is perfect, and the one thing about Soulless that kept me frustrated was the world building. This alternate London is a marvelous place, filled up to the corners with an intriguing social structure – and we get only the barest taste of it. It’s quite obvious that Ms. Carriger has done her homework and likely has a voluminous stack of notebooks on the minutiae of her world on a shelf next to her notorious hat collection (which I trust is far more tasteful than a certain hat collection on display in the book), and yet she shows us little enough that I found myself irritated that the book had the temerity to end after a mere 350 pages. Then again, perhaps this is what sequels are for, and the sequel is due out in March.

In sum, Soulless is an unusually strong showing for a first novel, for a comedy of manners, and indeed for a paranormal romance. In blending these with its other genres it manages to achieve what very few novels in any tradition do: it creates a strong enough sense of itself to stand out from the background noise in its genre. This book is something special, a paean to and gentle satire of the Victorian delight with frivolity, witty to the end. The closing author’s note in my ARC mentions the influence of Wodehouse and Austin on the style of Soulless, and while both have noticeable echoes in the author’s voice, I don’t think either does it justice. As good as Wodehouse is, and as iconic as Austin has become, Soulless is not properly a successor to either. It is something better. It is instead, if you will forgive the phrase, a very Wilde excursion.