Oh, man, what a difference a few days can make! 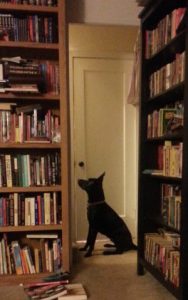 Shortly after my most recent post, I went into a bit of a tail spin over one of the issues that has tripped me up time and again with this book, and this series.

By way of background:
I initially envisioned The Antithesis Progression, as a gigantic, epic, be-all-end-all cold war spy thriller in space. It would cover several books, and would tell the story of the first interplanetary war from the point of view of the skulduggerous thugs and spies who did the shadow work to start it and keep it under control.

It was going to be high-energy, high-stakes, breathless suspense, and I was going to set it apart from the bulk of the spy genre with strong characterizations, which I hoped would lend it more human stakes.

I had some models in mind for those human stakes–Ken Follett’s Pillars of the Earth was a major one–but depite that, it was basically supposed to be a marriage of Tom Clancy and Robert Ludlum, with just a little extra leavening.

Great idea, right? Well, I thought so at the time.

But I Had This Problem
About 20% of the way into writing book 2, I stalled out. Pretty hard. It drove me crazy–I thought it was because I was podcasting Down From Ten at the time. Then, when I got going again, things were really slow. I figured it was because the book was so big and complex, and it kept getting bigger and more complex as I went.

When book 2 wrapped up, I was ecstatic, but when it came time to start book 3 a few months later, I stalled out. And I kept stalling out every time I came back to it, year after year, until it became this big singularity of artistic paranoia.

I wondered if I’d lost my mojo, but I was writing books left and right, so I figured I was just growing into the rest of the series. Last year I finally mustered up the determination to kick this thing’s ass once and for all. Stare down the terror and intimidation and teach this story who’s boss.

The result has been this blog. And, as you can see by the stops and starts I’ve been running into over the course of this endeavor, it’s been only middlingly successful–the book is getting written, but it’s proving exceptionally difficult compared to the rest of the writing I’ve done in the last couple years.

And it’s been driving me crazy. So crazy, that on Saturday…well, I had a little bit of a meltdown.

What Is This Thing?
One of the questions that’s dogged me about this series from the beginning is: “What is it?”
It’s been a nightmare to brand it for release. My publisher at AWP has had a hell of a time trying to do a series re-brand, because it’s not space opera, and it’s not HardSF, and it’s…well, it doesn’t seem to fit anywhere comfortably.

And, as I’ve grown as a writer, it’s stopped being just a publishing problem, it’s become a creative problem.

Thrillers have a particular structure and set of conventions. So do spy novels. So do political thrillers. And that’s what I’ve been trying to write.

But what’s come out, since book 1, has been something different, and I’ve been creatively at war with myself since the beginning of book 2, as I’ve been aware, on some level, that what I was producing was not matching up with what I was trying to do. I couldn’t put a label on it.

And, on Saturday, I hit that wall again. I’m up over 50,000 words, and I’m a little less than a quarter of the way through the story I was intending to tell in this book. That means this book will be another 200,000+ word doorstop–and that’s not a length that’s suitable for a thriller or a spy novel. Not even close. And I got…bent out of shape about it.

Fortunately, I had this mini-meltdown in the presence of my most excellent publisher, Kitty NicIaian.
When I was done, she had a thoughtful look on her face, and after a moment she said:
“You know, more than anything else, this series is like North & South in space.

The scales fell from my eyes, and I finally beheld Antithesis in all its undisguised glory. Not as a thriller, not as a spy novel, not even as a political mystery story…

But as another thing entirely–one of the oldest, and most popular genres of literature in the western world:

Pillars of the Earth, The Winds of War, Brideshead Revisited, Roots, The Godfather, Dune, Fall of Giants, War and Rememberance, War and Peace, these are some great examples of a genre that stretches all the way back to the foundational litereature of the western world.

And, growing up, it was my favorite genre. More than mystery or SF or Fantasy, which I devoured voraciously.

And it never once occurred to me that I was writing one.

I spent the next day wandering around saying “Family saga. Wow. How bout that?”

And the creative barriers were evaporating in front of me.

Wherefore Now?
Since then, I’ve written about five thousand words–as many words as I posted for net gain in the whole of May.
Those words did come at the expense of one chapter that wound up not mattering, and a lot of notes that I wrote through and incorporated in.

So, all in all, I’m posting a net gain for the last few days of 1157 words. Not grand. But oh man, they’re coming so much easier.

Onward and upward! For the first time since April, I feel like I have a prayer of finishing this series by December or January.

OBTW, for now I’m keeping the word-o-meter set at a target length of 120,000 words to finish, because I have no idea what this new awareness will do to how the book unfolds. In the future, I may have to re-set it for a higher target word count.