Time To Hold Your Nerve

For the last few years (with the exception of one I missed, IIRC), I’ve been writing New Years posts that have explicitly pushed back against the grouchy gloom and pessimism that seems to obtain everywhere, left right and center.

Why would I do this? 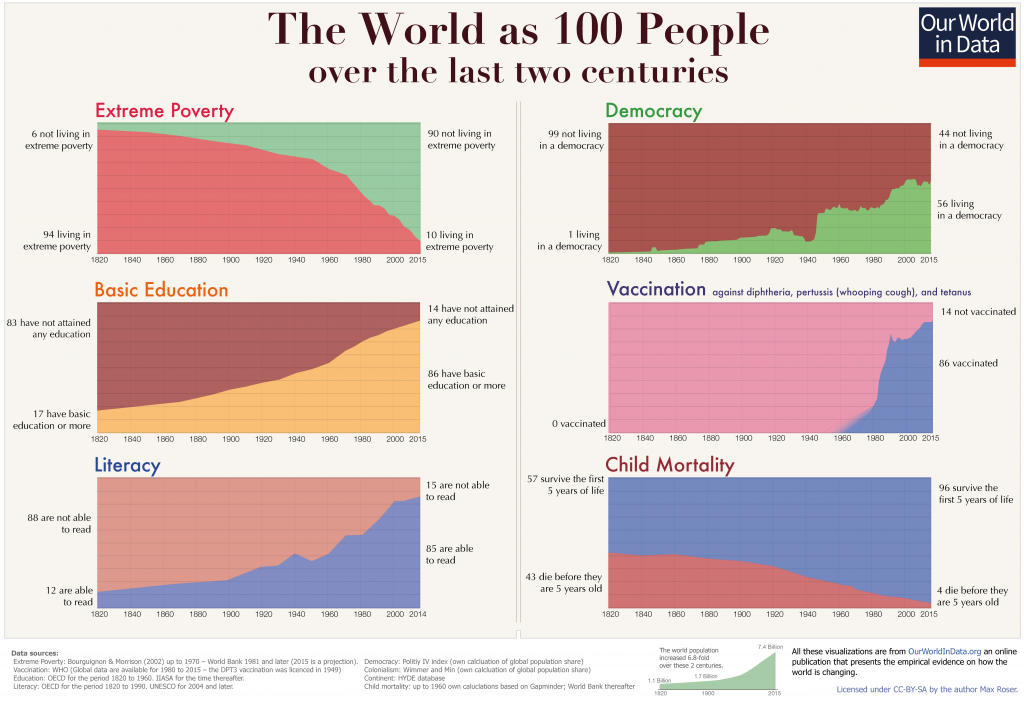 This is What the last 200 years looks like. Charts by Max Rosen.

These metrics say a lot–but they don’t say nearly enough. This year saw another slew of incredible technical advances that have a direct bearing on the quality of life of vast vast swaths of people. The first transplant of a hand onto the body of someone who never had one to begin with. The first child born to three parents, born without a genetic disease that otherwise would have doomed her. many more medical and technological and space travel and energy breakthroughs that it’s impossible to list them all And the highest ever parachute-free skydive (which, you gotta admit, is seriously cool).

These kinds of advances are symptoms of an epoch-defining momentum.

The sixteenth and seventeenth century gave us the printing press and the Age of Discovery (exploration and colonialism)–a tremendous economic engine that woke up the world and connected it like it had never before been connected in history, culminating in the creation of the very concept of humanity.

The ideas and incentives of that age gave us the Industrial Age, which defined the eighteenth and nineteenth centuries–which, not coincidentally, culminated in the destruction of the great empires that the colonial age created. The industrial revolution ended with the World Wars (which, understood on a historical time scale, were a pair of flare-ups in a 30 year-long implosion of the greatest imperial system the world had ever seen).

Then, the mid-twentieth century brought us the Nuclear Age, and the longest, most peaceful period in world history (there were wars, yes. A lot of them. But not nearly as many as was the norm before, and none of them were wars in the sense that the 19th and early 20th century came to know). This long peace (and the Cold War that drove it) gave us the greenhouse in which the current set of revolutionary technical developments could grow, and a cultural climate where human rights and civil rights could flourish and spread in a fashion unprecedented in human history.

And now, just as the past epochs ended by un-making some fundamental aspect of the era that birthed them, we are now in a new epoch that is un-making some of the basic realities that gave us the long peace.

One of those basic realities is centralization.

The twentieth century was the era of centralized institutional authority, of mass production and mass culture. The Soviets and other totalitarian states used this centralization to impose conformity–and so did the United States, both at home and in occupied Europe.

The twenty-first century is the Age of Disruption. And one of the first casualties of this disruption is cosmopolitan consensus. Especially in America and Europe, and especially in the educated classes, we look to the future and don’t think much about the past, except to look back and think “Thank God the world isn’t like that anymore.”

In a certain sense, we’ve been “done” with history for decades now. World Wars, Cold Wars, ethnocides, genocides, major regional conflicts, mercantile trade competition–these are all relics of the past. They only happen in the developing world, and they happen there less than they ever have. The open web, the centralized culture, relatively open trade, and the freedom of the seas have all worked together to give us a big tent into which we can invite more and more people-groups as co-equals in the human community. Sure, there are problems–some of them are huge, and they’re not equally distributed. But the basic facts-on-the-ground are good, and the only bad parts come from the wrong political party/people/interests steering the ship and cheating things to their own advantage, and if we can just disrupt those institutions that perpetuate the bad parts of the system, we can make what works for the elite work for the masses, too.

Every side of the political rainbow (aside, maybe, from the anarchists, theonomists, and communists) has had this basic attitude. And, damn, when you look at those graphs above, that approach really seems to have worked.

But nearly-free international communications and money transfer makes the phone and banking monopolies irrelevant. Personal tricorders (smart phones) are starting to make centralized medicine irrelevant. Private space flight makes the NATO military control of space (one of the cornerstones of international peace) difficult at best. Ebooks and POD paper and cheap shipping and open access science makes culture and policy a crowdsourced endeavor. CRISPR makes biology the god-like domain of any kid with a bioreactor and a garage (and bioreactors are easy to build). 3D printing and low-cost robotics makes hyperlocal manufacturing possible–which degrades the unifying authority of regulatory bodies, industrial associations, and trade unions. Applying that technology to weapons makes military and police authority less relevant. The free flow of information means that private think tanks can (and do) run intelligence operations whose analyses outmatch the most powerful governmental institutions in the history of the world. And consumerist attitudes (on the part of consumers) makes even monopoly powers in business vulnerable to short-term, rapid degradation and bankruptcy.

We may be done with history…

…but history isn’t yet done with us.

The rest of the world is rising. Technology is empowering individuals from cultures without long traditions of individualism. It’s empowering small groups fundamentally opposed to individualism, cosmopolitanism, liberalism (small “l”), civil rights, and freedom. It’s allowed people to live prosperously without having children–which has now put the economies of about 80% of developed countries in existential danger. Every invention in human history has a dark edge and a bright edge, and the dark edges of our current technologies are finally showing themselves–and they’re sharp, and they’re starting to make people bleed.

There will be a lot more blood before things settle down again.

So, here are my predictions for the next few years:

In almost every way, life will change across the world. In the Eastern hemisphere, we’re going to see fewer regional governments and more local ones. In the Western hemisphere, I expect we’ll see the opposite–stronger regionalism (despite the current resurgence of American nationalism). The march of technology is going to change a lot of the longstanding flashpoints of twentieth-century moral conflict (anything relating to abortion, bioethics, birth control, drugs, smoking, euthanasia, parenting, etc. is going to be up for grabs in ways that will make all sides of the current culture wars unhappy). It’s also going to revive and strengthen old ethnic hatreds and rivalries in a way that, ten years ago, almost nobody would have thought possible.

And, through all of it, the way we live and the things we care about will shift beneath us without us even noticing. Life will get longer. The world will get stranger. Humans will move permanently out beyond the gravity well. The world will settle itself out to a new way of working, and that way will encourage more localization and local control than at any point in history since the age of city-states (which means that cultural diversity will explode). Food will, by inches, become less dependent upon long-distance trade networks. Energy will, by inches, become less and less tied to petrochemicals. Disease will gradually become less relevant in the developing world than it currently is in the developed world. Human bodies will, by inches, become customizable. Humanity may even speciate.

The short term is going to be rocky. It might be the rockiest period the world has seen since the nineteenth century. But the long term picture isn’t just good, it’s amazing. Grand, and wonderful, and a little terrifying (if for no other reason than that we don’t have any history to compare it to), and with humanity reaching out into the solar system as a species where all–or almost all–individuals have access to the possibilities to shape their lives as they see fit.

The last few New Years I’ve said, in one way or another, that there might be a bumpy time during the transition to this new world with new rules that I’ve talked about. I’ve ended the last few years by saying, using slightly different words each year, The future is bright and infinite…if we hold our nerve.

Well, now the time has come. Resist the urge to silo yourself. Take up the challenge of staying connected across cultural lines, of building relationships with people who don’t agree with you, of learning about the parts of the world that think about life in ways you can’t even fathom. The future is brighter than it’s ever been, but across the world, the present is darker than it’s been in eighty years.

Now is the time to take note and remember. The end of World War Two put European history on pause. The fall of the Soviet Union put world history on hold for a while. Now history is back, and it’s bigger than ever. Your life will bear witness to the stuff of future memory on a scale you never expected. These are the years your grandchildren will ask you about.

So gird yourself and hang on tight.

Now is the time when we must hold our nerve.