Released: At The Edge of Nowhere - 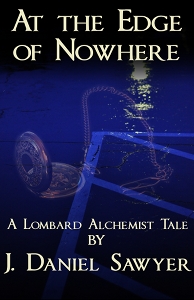 been prepping for a while now. The Lombard Alchemist Tales center around a pawn shop in a gambler’s town–but not just any pawn shop, a special pawn shop full of strange artifacts, each with a unique story and an unusual effect on the world.

The Lombard Alchemist Tales are stories of mystery, and darkness, and wonder. At the borders of society, around the next quarter, lurking in the shadows, all around us are stories fit to unmake our darkest dreams. My job? Find them, bring them to you, and let you figure out how to survive them.

And what of this story?

If you spend enough time at the end of your rope, you’ll make some bad choices–make enough of them, and your choices start making themselves. But when you’re a nineteen year old boy living on the streets with no money for food, you find salvation anywhere you can. Maybe in a dumpster, or a brothel, or a gun. Or maybe in a creepy, cold pawn shop, in a broken down city at the edge of nowhere.

At the Edge of Nowhere is now available through Amazon, Barnes & Noble, and Smashwords.

At The Edge of Nowhere
A Lombard Alchemist Tale
by J. Daniel Sawyer

So I found a place in a two-floor walk-up in a city just this side of nowhere.

A way to get lost?

To get lost, you have to know where you’re at to start with. All I knew is what I was leaving, and that I had three weeks of cash float to find a job.

Nobody was hiring in any field I knew anything about—granted, that wasn’t a lot. At nineteen, I’d done more than most people ten years older than me, but I was nineteen, and there’s only so much you learn by that time.

Quick as bread goes stale, I ran through my prospects. By the end of five weeks, I was down to pocket money, and only got that by selling bits of junk I found on the street to make me last a little longer. Even then, I was running out of places to sell. Even in a city full of gamblers, there are only so many pawn shops, recycling centers, and used bookstores. When that’s all you’ve got to make it on, and you’re a kid that pushes too hard, you use up good will fast.

Mine was pretty much gone.

You find yourself in situations like that when you grow up being taught that money isn’t important as long as you’re a good person. If I learned anything in those three weeks, it’s that when you don’t have enough money to eat and sleep, you don’t stay a good person for long. Even in that economy, there was plenty of work for someone willing to look the other way.

One thing about being on the edge of nowhere: “looking the other way” doesn’t mean ignoring a buddy stealing pencils from the company store. There was one night I got cold and hungry enough I actually went down to 43rd street, where the streetwalkers do their thing, to talk to a pimp about a bodyguard job. He assigned me to a twelve year old—couldn’t tell if it was a girl or a boy dressing cross, but it didn’t matter. Without money to get back across town to my rooms, I didn’t have much choice: I slept under the bridge with a rock in my hand and nothing but air in my belly.

By morning, I knew that if I didn’t find some way to turn a buck, I’d be back to the pimp tonight, and I’d protect the customer from that twelve-year-old if the kid tried to bite, and I’d do it with a smile.

Some people say you’ve always got a choice. Those people have never made so many wrong ones that their choices start making themselves.

I had the jacket on my back—the last bit of home I still owned. I’d have to sell it to eat, and to get a bus ticket.

There was only place near here I could maybe trade it for a few bits—the one hock house left in town that I’d not hit yet. Time to time I heard about it from other drifters, diving in dumpsters for the occasional treasure someone tossed away, but I’d never gone. Too far past the end of the bus line, too expensive to make the trip.

Two miles of walk. I still had enough rubber on the bottoms of my shoes to make that.

One mile along, it started to rain, and hard.

A little gray bungalow at the end of town, used to be a family house back in the days when families didn’t mind living this far from the good schools—back when most people were farmers and laborers. Now it was just a shop, the front walls knocked out so the windows could be expanded, the plate glass providing no view past the cram-and-crush of trinkets and junk.

There were a lot of dollar signs. I remember the way they looked, lit through the rain like the yellow lamps on the bow of a ship coming through the fog to rescue folks off a shipwreck.

Word on the street was they paid well—I’d have been happy if they paid enough for a hamburger.

The door had a bell, like you might hear in a Christmas tune. Ghoulish, ringing as I stepped through the door to look directly into the dead eyes of a stuffed creature I couldn’t quite identify. A badger? A wolverine? Whatever it was, it looked like it was having the kind of day I was. I shied away, skulking along one of the display cases, taking in the gaudy jewelry, the antique stamps, the crosses and pentacles, the pearl-handled revolvers. Nothing had a price tag, but any one of the things here would have fed me for a week. Maybe two. Not even the foreigner at the high-end hock shop downtown would turn one of these things away.

It was all locked away under glass. I couldn’t get to it if I tried without making a god-awful row. I hadn’t had a chance to learn to pick a lock, and, pathetic as it sounds, I shied from breaking the glass mostly because I couldn’t afford band-aids for my hands.

To get in I’d need a key. To get out of here, I needed someone willing to loan me five on the jacket.

But the shop was empty—not a soul, not a whisper except for my own breathing.

“Hello?” I don’t really know how loud I said it. In that moment, I didn’t really want an answer. If nobody was there, perhaps I could be out of the rain for a few minutes. Perhaps I could look longer.

There was a fire at one end of the room, in a fireplace left over from when the shop was a home. A family lived here once. Probably the showroom used to be bedrooms and a family room. Maybe they watched TV right where I was standing. Maybe they yelled at their children about the company they kept. Maybe one of them beat another to a pulp in this room over some small thing—a hairbrush left out of place, or a failure to wash the dishes, or a skirmish over bed times.

The possibilities were cold as the room. The merest hint of breath fogged in front of my face—the fire didn’t seem anything more than a light show, even when I walked close. I was soaked to the skin, and shivering. Drawing my jacket around me for the last few minutes of our relationship was like making love to a girl you plan on leaving—the touch was nothing more than a reminder of the sheer uselessness.

And like a useless woman, it only left me colder.

I could have used some of this cold last night. Qualms felt warm—but without them, I wouldn’t be starving now, and freezing. I’d have a meal and a bath and be home in my bed, such as it was. At least for today.

The mantelpiece was festooned with taxidermy over the cold-enough-to-be-dead-fire; all manner of birds and vermin. If I brushed them aside, would I see a device for calling up demons? Why else would a fire be so cold?

Or maybe it was just me.

I tapped at the different trophies. Light and hollow, stuffed with sawdust, nothing remarkable about them, other than their deadness.

But as they shifted around, I spotted between them something—a watch, white gold, but thick with dust. In a clean room, this must have been forgotten behind the trophies for years. Completely neglected, on a silver fob. Old. The mechanism still worked when I wound it. Might fetch a few hundred on the open market.

My fingers twitched against the hearth’s oak. Somehow, sinking to theft felt lower than the job I’d turned down last night. But that was last night, and this was today. My mouth watered as my tongue curled around the pizza it would taste once I hocked the watch uptown. My spine shivered even more as my gooseflesh imagined a weatherproof coat to see me through the winter. Every nerve stood on the brink of action. It was, after all, a forgotten thing. It wouldn’t be missed.

“May I help you?” hacked a voice behind me.

Read the rest on your Kindle, Nook, and all other readers.