Released: The Society of Miserable Bastards |

The South. Home to 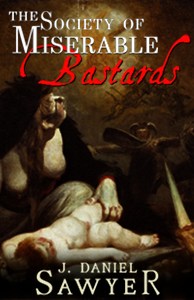 a deep culture steeped in African mythology and religion, Native American spirituality, Catholicism and Charismatic Christianity, the blues, and the deep, pounding heat. It is the source of one of the richest literary traditions in the world: Southern Gothic.

If you’ve seen The Twilight Zone, or read Ray Bradbury and Flannery O’Connor, or heard the Delta Blues, you’ve tasted it–maybe without realizing it. It’s always been one of my favorite genres, but I’ve only dipped into it rarely. If you’ve read Buried Alive in the Blues or some of The Lombard Alchemist Tales you’ve read my take on some of the lighter, more humorous and romantic sides of the Southern Gothic. This time, though, we’re going deep into the darkest heart of the mythic world where the Devil teaches the Blues at the crossroads, where the mystic communes with the spirits of the land, and where the gods and demons roll dice for the souls of the dead.

Turn off the lights and light the candles. Get a good blanket and a comfy chair in a safe corner. Make sure you’re facing the door so you can see if anything comes for you, and step with me into my nightmare as I present you with the twisty tale The Society of Miserable Bastards.

Thee decades ago, ten children were abandoned in a pit of quicksand by mile-marker thirty-five to protect the reputation of the all-powerful Chiswick family. Saved by the local bag lady, they now meet annually as The Society of Miserable Bastards to bestow blessings upon the family that abandoned them, one by one. And tonight, they have a very special guest indeed…

Available now in the Kindle store, the Nook store, and in all formats at Smashwords.