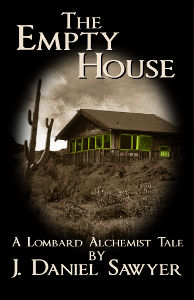 is a series I’ve been working on for a few years now. Beginning with At The Edge of Nowhere, these stories center around a creepy pawnshop in a gambling town on the edge of a nuclear wasteland, and the artifacts it sells–all of which are more than they seem. Subsequent installments like Chicken Noodle Gravity, Sunday Morning Giraffe, and The Serpent and the Satchel have proven very popular, and over the course of those four stories, I worked out the mythos and history of pawnshop and planned out fifteen more stories.

Now, the first of the new batch is here: The Empty House.

Love is a hunger…

Alan Tosetti set the sterling standard in a town built on silver. The greatest architect in Nevada history, he died before he could finish his masterpiece Craftsman. Two years later, his youngest daughter, died in the same house, sitting in front of the fire, of old age.
She was only twenty-six.
When the tales of Tosetti’s legacy draws a hungry young architect from the big city, he finds a broken-down ruin with a soul full of music, and a chilling secret that can only be unlocked with the help of a demonic pawnshop in the radioactive wastes in a broken-down city at the edge of nowhere.

Now available as an ebook from Smashwords, Amazon, Kobo, Apple, and Scribd.