And Then She Was Gone, Introduction |

Note: This introduction is included in the epub version of the serial which posts to the podcast feed tomorrow, along with the first chapter. 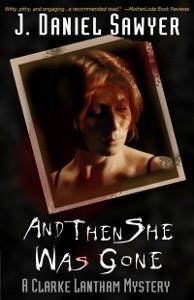 YEARS AGO, I read the opening of a hard-boiled short story at the Baltimore Science Fiction Convention, on the assumption that an audience who’d spent three days solid immersed in science fiction might fancy a bit of a shake-up. As a writer of very dark, very political science fiction tales, I wasn’t prepared for the response I received to a (as far as I was concerned) ridiculously silly story told by a detective who was so deeply dysfunctional he had no choice but to laugh at it.

I expected a few chuckles from the assembled audience. What I got were repeated, persistent demands for a release date. I immediately bumped the short story to the top of my agenda, then sank into despair as it proceeded to eat my July as it turned from short story to novella to novel, with no end in sight.

When it was finished, I realized I was doomed. Clarke Lantham had taken on a life of his own, and the character I had intended for pallate-cleansing humorous short stories had created for himself a literary world every bit as twisted, dark, hilarious, and disturbing as that of the golden-age detectives who inspired him. More than that, his cast of sidekicks already started chewing away at the inside of my brain, suggesting storylines, plots, and ideas that shocked even the jaded sensibilities of this San Francisco native (if you’ve never been to San Francisco, trust me, you very quickly lose the capacity to be surprised or offended by anything that most sensible folks consider outrageous).

By the time And Then She Was Gone hit the shelves later that year, I’d planned a four-book story arc. By the time A Ghostly Christmas Present showed up a few months later, it was a seven book arc. Now, having just begun the galley stage of book five, He Ain’t Heavy, the total planned volumes stands at twelve.

Most of you reading this are finding it in your podcast feed, which has previously been populated by my Science Fiction, Fantasy, and Slipstream stories. Now, in honor of the forthcoming release of He Ain’t Heavy, I’m pleased to present you with a taste of my other favorite genre.

Clarke Lantham is a disgraced ex-homocide cop who makes a spare living by indulging his voyeurism habit. Since getting tossed off the force due to a severe lapse in judgement, he’s resigned himself to an unremarkable life catching people who embezzle from 7-11’s parent company, chasing insurance fraudsters, and doing employee background checks. He inhabits the real San Francisco Bay Area, and the genius loci (spirit of the place) co-stars with him. The time is the day after tomorrow. The places in these stories are real. The restaurants are real. The traffic patterns, roads, lingo, subcultures, houses, streets, flora, fauna, and drugs are all real. The academic conferences, the bad guys, and evil overlord are fictionalized riffs on things that have really happened, or that might. And it is in this world filled with biotech, nanotech, hi-tech, suburban S&M, fashionable therapy, borgeois bohemians, street criminals, and gorgeous sunsets that Lantham finds himself on the trail of a missing teenager, whose mysterious disappearance shows him parts of the strange world that pulses just beneath the surface around the bay—the world that changes the shape of his life forever (or, at least, for the next 11 books).

New chapters will post every Tuesday and Thursday throughout the summer. Each chunk will run between 2000 and 3000 words (exactly the right amount to occupuy you on your lunch break). This is an experiment—I’ve never serialized stories in text format before. However, should you all prove as lively as you are with audio content, I will definitely record and release new Dealing In (feedback) shows featuring your comments, questions, voice mails, and the strange discussions and arguments they provoke. If you are inclined to join the conversation, feel free to send feedback to feedback@jdsawyer.net or to call the voice mail line at (612) 567-7595.

So check this blog tomorrow morning, when I shall proudly present And Then She Was Gone, Book One of The Clarke Lantham Mysteries.

Continue on to chapter one by clicking here.