A song came up on my playlist today, an old 80s tune called Believe it or Not. It was originally the theme for a goofy-fun show called The Greatest American Hero. One of my favorite songs ever, it captures a feeling of soaring exuberance that, as a kid, I thought must be the peak of happiness in life.

Now, as an adult who gets to write everyday, it means something different. I hear it, and it feels like writing–especially the feeling of finishing a scene or a story that came out better than I could have expected (it’s something that starts to happen when you grow the ability to trust yourself and let your subsconscious take the story in unexpected directions). I look back over what I’ve read, and I hear that line:
Who could it be?
Believe it or not, it’s just me.

A glorious thing–and a great 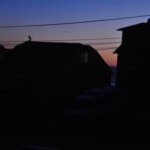 song to hear as I’m looking out my writing office window at this sunset (click to enlarge).

So, here’s how the day shook out:
Shift 1
Did a couple thousand words on the current nonfiction project, did some corporate admin, then broke for the afternoon to make breakfast and take the dog out onto the beach and lay down evil plans for the evening (all plans that extend my ambition for world domination are, by definition, evil, because evil is more fun).

Shift 2
Didn’t wind up doing second shift today. I had a migraine coming on (I’m prone to them, partly due to a neck injury in childhood), so I laid down for a couple hours to let the neck muscles loosen up.

Shift 3
Was groggy from the nap, and couldn’t track the words on the e-reader in the booth, so instead I worked on the Antithesis podcast instead. Wrote the new aftershow and story-so-far segments, did some QC on episode 9, then had a conference with someone who might be helping me whip the Antithesis series bible into shape,

Shift 4
Sat down to work on Book 3 with Wiseguy playing in the background. It’s one of the shows that had a strong influence in how I decided to approach the whole saga of Joss Kyle and all the people whose lives he disturbs. Easily Stephen J. Cannell’s most underrated show. Incredible storytelling, great depth of characterization, very chewy moral dilemmas–exactly my kind of thing.