Released: Down From Ten |

I’ve been waiting for this day 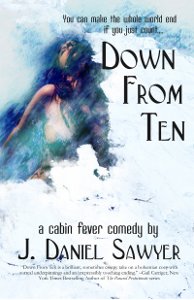 a long time. When I first wrote Down From Ten as a screenplay, a production company in Canada was going to be handling rights clearances for the Alan Jay Lerner music incorporated into one of the scenes. When I did the podcast, ASCAP was very helpful. But as a print book, I had to wade into a rights clearance arena I’d never worked with before.

It was worth it. And the folks at the company that manages the Lerner estate were very helpful. Because of their kind work, I can now proudly present you with the ebook version of Down From Ten, a novel uniquely close to my heart.

In early January, a group of friends gather for an annual retreat: eight artists, scientists, and authors cloistered together in a mansion in California’s high country for ten days of games, conversation, exhibition, and hedonism while isolated from the outside world.

The biggest Sierra snowstorm in over twenty years, however, is not part of their plans.

When the house is buried in an avalanche, leaving our heroes with no way to hike out, they must somehow survive and stay sane while waiting for rescue—which becomes difficult when they all start having the same dream.

“Down From Ten is a brilliant, sometimes creepy take on a bohemian cozy with surreal underpinnings and an irrepressibly touching ending.” –Gail Carriger, New York Times Bestselling Author of The Parasol Protectorate series

For the first time in text, read the story that View from Valhalla calls “Unique, lavish, and challenging…amazing in its scope and its detail…with THE most surprising ending I’ve EVER experienced.”
Get it now in Paperback or for your Kindle, Nook, or any other reader.