The Double-X Daredevil with 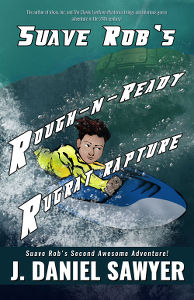 a heart of adrenaline returns. Last time he surfed a supernova–this time he’s up against deep web monsters, deep sea madmen, and a horde of preteens with bird wings.

When bastardly forces threaten, only Suave Rob can save the day!

Surfing Betelgeuse made him the galaxy’s ultimate badass, but when Suave Rob gets thrown in the klink for brawling with his best bro, and forced to babysit a bevy of bratty delinquents to avoid the Bastille, he figures that even badasses get the bogus end of the stick sometimes.

But egregious evil never sleeps, and when his wards get hijacked by the world’s most heinous underwater overlord, Suave Rob pulls out all the stops to jump bail and embark on history’s most epic high-dive. With seventy-two hours to save their bacon, the double-X daredevil’s gotta put it all on the line to rescue the rugrats, and bring ’em back to the stars!

The first of two Suave Rob books this year, and the second in the trilogy that forms the origin story of the galaxy’s most bodacious superhero, this Rugrat Rapture is one spectacular ride you don’t want to miss–especially with what’s coming next. Book your pre-order today!

And keep your eyes peeled for Suave Rob’s Amazing Ass-Saving Association later this year, where you just might learn the real story between how the galaxy’s most excellent adrenaline junkie became the galaxy’s most bodacious superhero!