If you’re looking for the daily writing blog, I’m currently doing a very late writing shift after taking most of the the day off. There was a birthday party tonight, and it was glorious, which merited some schedule squshiness.

Okay, everyone, this is the big one. Back when I originally planned the Clarke Lantham Mysteries, I had four books in mind. And Then She Was Gone and Silent Victor you’ve read (and if you haven’t, what are you waiting for?). The series ender Extinction Tango still lies in front of us. The last one I’d originally planned for was Blood and Weeds.

And now it’s here. The biggest, baddest, darkest, twistiest Lantham yet. This one goes places that even I was scared to go, and if it doesn’t leave you gasping and strung out and gagging for more by the end…well, then, I don’t know what to tell you, because that’s the effect it had on all the beta readers, including the one that is hypercritical of my work and only likes my writing “sometimes.”

If you thought the stakes were high when Lantham was hunted by mercenaries in In The Cloud, or when he was at death’s door in He Ain’t Heavy, or when the Chinese government wanted his hide in Silent Victor, you ain’t seen nothin’ yet. This time it’s not just his ass on the line–this time, the case might just spell the end for everything, and everyone he loves.

I can’t tell you how long I’ve been waiting for this one. So, here’s the straight dope on what it is, and where to find it. 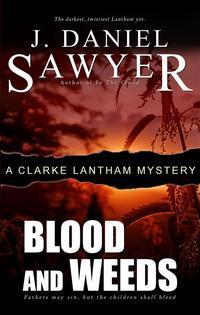 the professional snoop down the street, he opened his own detective agency. But when Teddy’s father goes off the rails, and his precocious investigative prowess fails him, he turns to the only firm he knows who might be able to find out what’s wrong before it’s too late: Clarke Lantham Investigations.
Clarke Lantham hates family squabbles, but something about Teddy made it impossible to say no. Lantham had no way to know that taking the case would send him straight to the heart of the biggest academic scandal in state history, and set him on a collision course with ghosts from his past that could jeopardize his freedom, ruin his career, and endanger the life of everyone he loves.

Fathers may sin, but the children shall bleed.

Get it everywhere through this link.