This morning, I woke up to snow and everything that comes with it: Icy roads, changing plans, deep-bone aches from the cold… 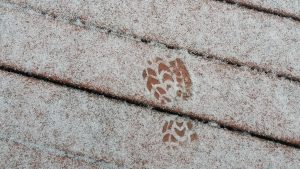 When you don’t grow up in the stuff, it doesn’t matter how many times the snow ruins your day, it’s still magical. So, after running Trixie ragged in the back yard (and laughing myself half to death as she barked at the ground for having the temerity to frost-nip her nose when she tried to pick up the ball), I went for a nice, long walk.

That’s part of recovering from being sick for me: getting the lungs working again.

On the walk, I got to test out a new configuration for the recording rig, and process some of the huge changes that have happened over the last year, and (maybe especially) over the last couple weeks. Some of that will show up in the New Year’s post, some of it will trickle out later.

It’s been a big year. Next year’s gonna be even bigger. So in the long twilight week between Christmas and New Year’s, take some time to take a breath. Enjoy the moment–whether you’re recording the sound of the snow falling or having a cup of coffee to ward off the cold or t 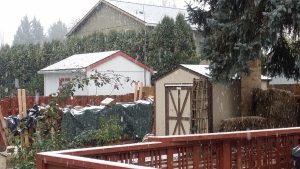 elling spooky stories around the fire (you can hear some of my favorite spooky Christmas stories here, by the way, performed by yours truly and my friend Andrea Fender).

This year has, for most of the people I know, been a constant diet of outrage and crisis. But it’s slow-news time right now, so take a deep breath. Get some R&R with the people you love, or some quiet time to yourself. There’ll be plenty to get excited about in a couple weeks. Don’t let the outrage and crisis eat the most precious thing in life:

The moments that never come again.

—- —-
By the way, if you’re hankering for some excellent stories to tell around the fireplace or to read while you’re stalking Santa tonight, grab the Christmas Cheer bundle while the grabbing’s good. Set your own price at Storybundle.com now and through the 28th of December.